Destiny 2 Heroic Public Events Guide with locations of every pubic event and how to turn them into heroic public events.

Destiny 2 Public Events are open world events that anyone near the area can participate and then earn a chest at the end that reward tokens for that planet, rare gear and chance at legendary or exotic engrams. They are represented by a blue square icon on the map with an orange outline. If you hover over them, you can see how long before they activate and the orange outline tell you the time remaining at a quick glance as well. Public events are a great way to get rare gear, tokens for each planet’s reputation, and get lucky with exotic engram drops.

While most Public Events can be soloed, the heroic version usually require multiple players. Activating the heroic version have specific requirements but they drop more rare gear and have a better chance of giving out legendary and exotic engrams so they should be converted to heroic mode whenever possible.

If you have any Fireteam Medallions (they can be purchased from Eververse for Bright Dust), they are good to use on the Heroic events to increase XP and get better chances at legendary/exotic engrams. 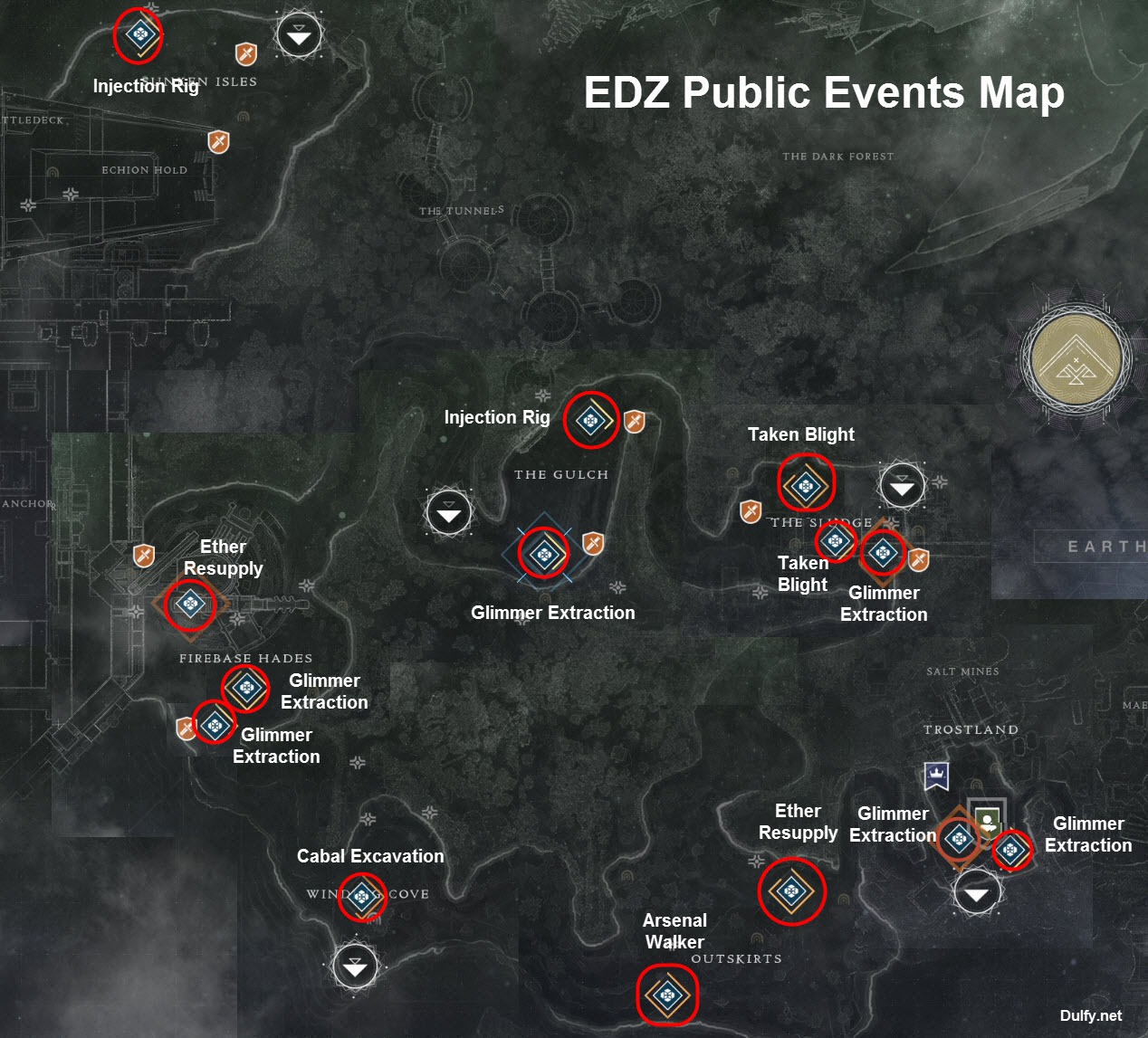 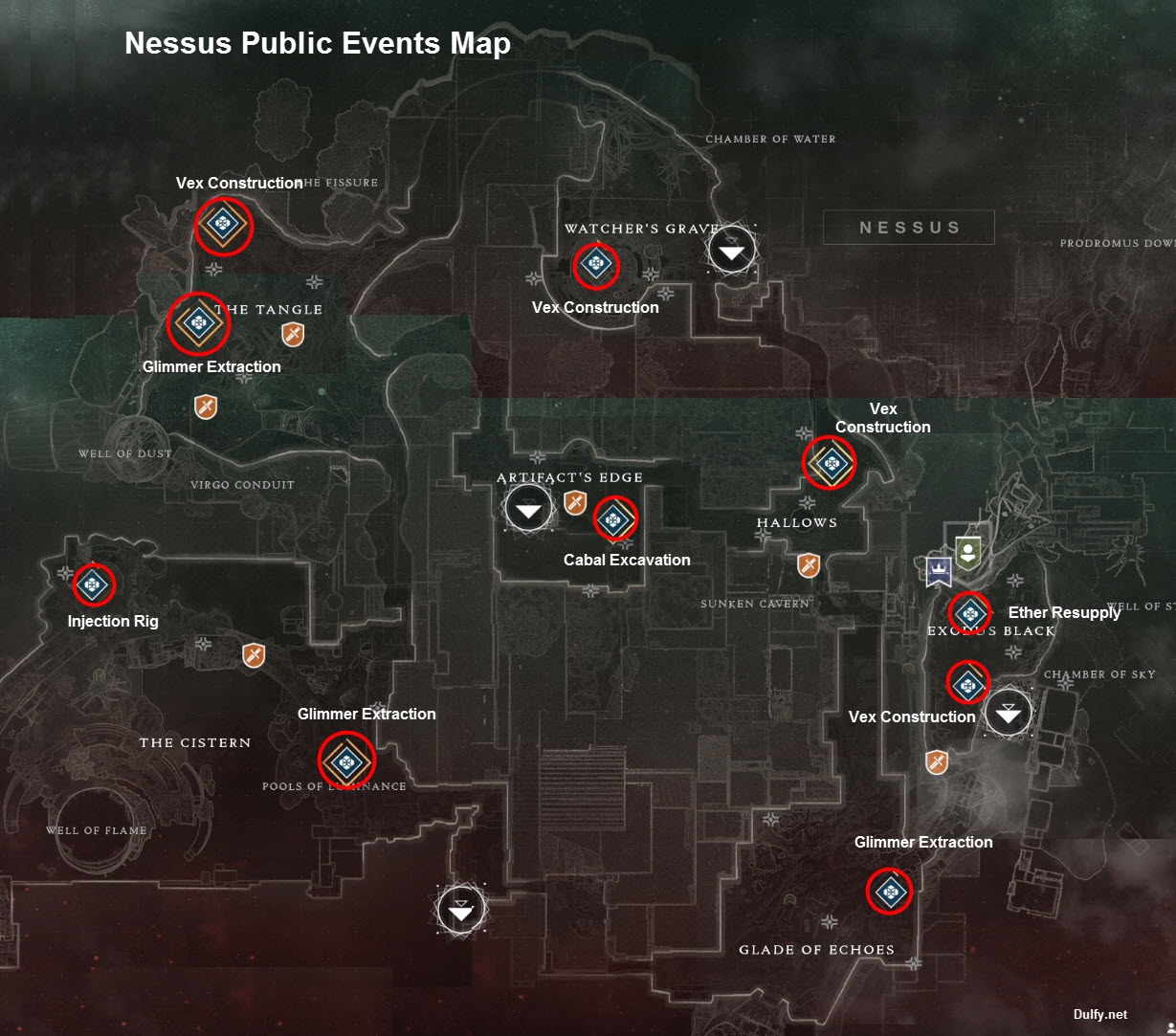 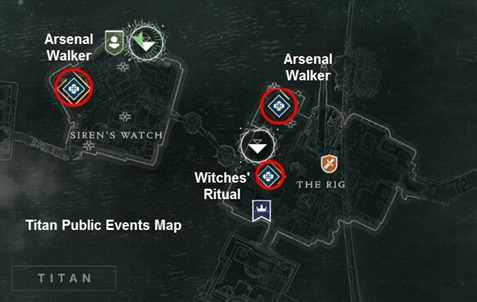 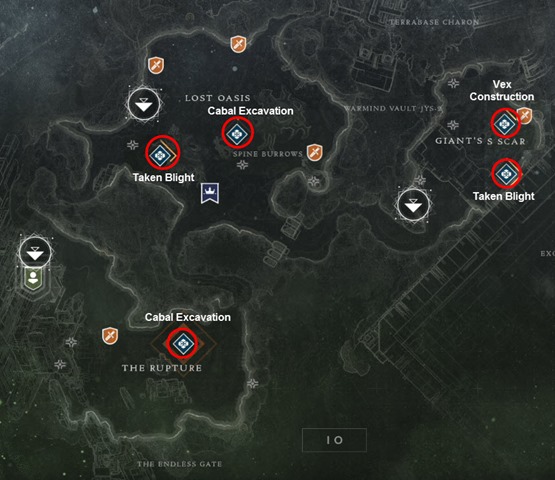 For this event you have to override the Cabal Mining Lander by standing inside the white circle around the Lander and defeat Cabal enemies while dodging airstrikes.

Heroic Version: If you look up, you will see a Thresher Cabal ship flying several flying passes around the area. Shoot this ship down and you will activate the heroic version, which spawns Excavator Valus.

For this event you have to defeat the Prime Ether Servitor which is this giant floating ball and survive onslaught from incoming Fallen enemies. While damaging the Prime, smaller Transport Servitors will spawn periodically and shield the Prime. Kill these Transport Servitors as they spawn. You will get ported randomly in the air by the Servitor and must jump down again to face the Servitor. Just jump before you land to avoid taking fall damage.

Heroic Version: Keep an eye out for when a wave of three Transport Servitors spawn. You must kill them fast before they despawn and this will trigger the Heroic version of the Ether Resupply Public Event if you managed to kill all three Transport Servitors in that wave. The heroic version just continues the fight with the Prime Servitor getting a bit harder and port you much higher up for Servitor’s Fall but otherwise it is kind of the same.

For this public event you have to defeat four waves of Extractors that contains four Fallen Extractors per wave with a Fallen Captain being the last of the four. After each wave you need to follow the fallen ship and move to a new spot.

Heroic Version: During each wave of the Glimmer Extraction event where you have to defeat four Extractors, there is usually at least one projector looking device on the ground. They have a lot of HP but can be killed but you must kill them before the four Extractors are killed. If you kill three of these devices, you will be able to trigger the Heroic version of this event. There is 4 waves to this event so if you have some leeway there if you failed to kill one during a wave. If you manage to trigger the Heroic version, you will need to stand inside the Glimmer pile circle and defend against waves of Fallen onslaught until the Transmat is complete.

This event is pretty difficult to solo due to the swarm of high damage mobs. You have to kill the Infiltrator Psion and after that a fire shield spawn around the Rig that deals continuous burning damage for a few seconds. Enemies inside the shield can be only damaged if you are also inside the shield. Once all three Psions are killed, Infiltrator Valus will spawn and need to be defeated for completion.

Heroic Version: This one is pretty difficult to trigger the heroic version because everyone need to be really focused to triggered it and it is really difficult to do it alone due to the short time limit and high damage requirement. Save your power weapons for this. Once you killed the first Infiltrator Psion, the Rig will spawn a fire shield that deals continuous burning damage to anyone inside it and start opening the top ports to vent. You have to stand inside the fire shield and shot at the exposed orange interior opened by the ports until you see the orange fire disappear and white smokes come out of it. There is a quite a bit of HP on these things and if you don’t kill it fast the fire shield will kill you and the port close pretty quick. Once you have to the top port killed, you have to do it for the middle and bottom port as well when you kill the second and third Infiltrator Psion. You have to be coordinated enough to kill the top port after the first Infiltrator, middle port after second Infiltrator and bottom port after the third infiltrator or you won’t trigger the heroic version.

The Heroic version spawns a much tougher Infiltrator Valus with several Interceptor Pilots to harass you. You can kill them and steal their Interceptors and use it on Valus instead.

This event has you killing Taken to damage the big circular Rift orb which is immune to damage otherwise. To trigger the heroic mode though, you want to avoid killing the Taken as much as possible.

Heroic Version: Instead of killing the Taken that spawns, strafe into the smaller Rift orbs that’s spawn and you will get a buff called Blight Receding that lasts about ~6 seconds which allow you to damage the big Rift orb by shooting at it. Keep doing this until you do enough damage to spawn the Blightmaker.

For this event you have to defend the middle power node against waves of Vex trying to steal Integrations from it for their own construction. There are 10 Integrations in total and if the Vex steals all 10 the event fails.

Heroic Version: To trigger the heroic version, watch for the three beams that the middle power node gives off. Each energy beam lead to a location where a solid ring on the ground will appear as you approach. Stand inside that ring and capture it to 100. Do this for all 3 rings and prevent all 10 integrations from being stolen by the Vex to activate the heroic version. The heroic version summons a few more elite Vex mobs but otherwise isn’t very different.

Two Ritual Wizards will spawn, each protected by a shield that gives them immunity. To remove their shield, you have to stand in one of the two circles on the ground and capture it, each removing the shield of the witch on their respective side.

Heroic Version: To trigger the heroic version, you need to destroy the two stones that spawns on top of the portal on either side of the portal during the Prepare for Battle phase after the witches are killed. They are also shielded so you will need to stand in the appropriate circle to remove their immunity shield and kill it. Killing both stones within the time limit will spawn the Abyssal Champion.