A guide to the 2017 Beer Festival in Black Desert Online running from Sept 14 to October 18.

This event is a cooking event where you have to make lots of beer everyday but in return you can earn 5 mil silver per day. Unfortunately there are no Cold Dark Beer rewards like previous year.

There is a chain of 5 quests you have to complete first to unlock the daily. These quests can be only done once per family between the periods of Sept 14 7 am UTC to October 11 11:59 pm UTC. Completing this series of 5 quests will reward you with 5x Imperial Craft Delivery Invoice.

Obtained from Pasvinder at Heidel. She is the Imperial Crafting Delivery vendor. This quest has you go to Melissa Brady across the street. 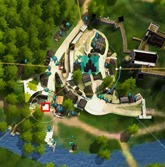 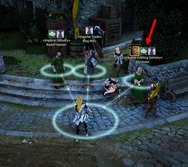 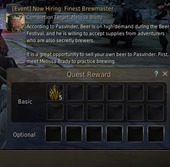 From Melissa Brady after you have completed Now Hiring: Finest Brewmasters. Rewards 5x Barley and directs you to Constante inside the inn. 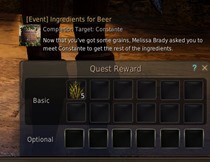 From Constante after completing [Event] Ingredients For Beer. You need to make beer (having them already in your inventory doesn’t count). If you forgot how to make beer it is 5x Grain (i.e. Potato or Barley), 6x Mineral Water, 1x Sugar and 2x Leavening Agent. Remember that you also need a cooking utensil and a house to place that utensil.  Head to Melissa Brady after you have made the beer. 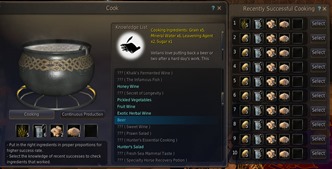 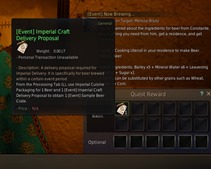 [Event] Ship It Baby, Ship It

Obtained from Melissa Brady after you completed [Event] Now Brewing. For this quest you will need to make a Sample Beer Crate. 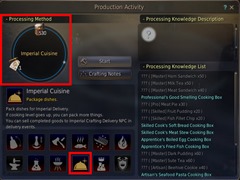 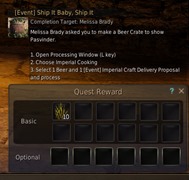 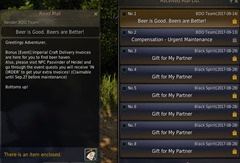 This final quest from Melissa ask you to turn in the Beer Crate to Pasvinder. To do so, turn to page 2 of the Seals turn in and you will see the option to hand over the sample beer crate. 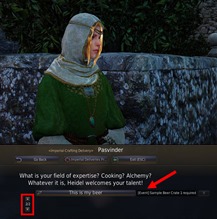 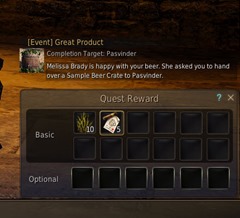 After you are done with the initial series of 5 quests, you unlock the dailies. There are four options for dailies but you can only pick one per day (they are identical, just different on the starting NPC). The dailies are obtained from the Imperial Crafting Delivery NPC of each of the major cities listed below. Pasvinder is probably the easiest to get to but other NPCs can be handy if you are not around Heidel. 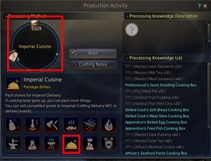 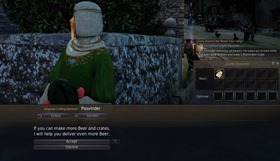 You get Imperial Crafting Delivery Notice in two ways (max of 10 per day), allowing you to make 5 mil silver per day.

To use the Imperial Crafting Delivery Notice, you open up the processing window (L by default) and click on Imperial Cuisine. This will allow you to combine 1x Delivery Notice with 50x Beer. If you forgot how to make beer it is 5x Grain, 6x Mineral Water, 1x Sugar and 2x Leavening Agent. 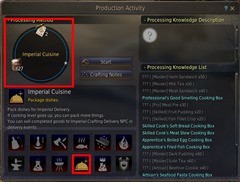 The [Event] Beer Crate you make from this can be sold to the Imperial Crafting Delivery Vendor (i.e. Pasvinder or any of the daily NPCs listed above) for 500k silver per crate, allowing to earn a lot of silver in this event by just making beer.

My Potatoes are ready! c:
Thanks for the guide!

Multiple potato computers? that is dedication to BDO

@dulfy I made the inital quest beer crate before accepting the quest. Any way to complete it now? What do I do 🙁

would like to know this too,same happened to me

i mean the first quest that ask you to make one.. i made the stuff before i picked up the quest so now they wont accept it

same thing happened to me, I made a beer crate with another event coupon that i got from my daily login and the quest completed. I had to trash the 5 stacks of Green Beer Crates.

Check your mail, they sent in 5x Propsals

i got 5x propsals from mail. and process it. it became [Event] Sample Beer Crate. and i can`t exchange it

Thanks so much Dulfy!

So I’ve done the initial quests for the event and the daily. I still have 4 [Event] Imperial Craft Delivery Proposals which are used to make the Sample Beer Crate. Should I just throw these out?

Yup safe to throw them out

Thank you Dulfy!! Not really sure why we get so many of them lol

No reason to transport them? No distance bonus?

I made mine in Heidel, went to Altinova. It showed 250% distance bonus and 2 prices, 613K at the top and below that 500K. I received only 500K. So it appears that it calculates the distance bonus but being an event it won’t allow you to receive it.

what do you do with [[Event] Sample Beer Crate]?

Once you turned in for the initial quest, there is no use and can be deleted.

How much will we earn by the end of all this? How much trading exp do these give?

How much trading exp do these give and how much silver by the end of it all?

No trading exp as far as I can tell, but it is 500k silver per crate (5m per day, more if you get lucky and get multiple crates from one craft). By the end of the event, that’s… potentially 170m silver (or more) if you do the full 10 crafts every day.

You also get 30 Cool Draft Beer for each crate you sell. This was mentioned in the news post about the event, but in-game there doesn’t seem to be any reference to it. I now have a tonne of these thanks to the event.

Does it worth the reward?

I am so stupid I noticed now this easy event…

guys would the Imperial Crafting Delivery Notice go after the event?

You have one week after the event ends to make/turn in any crates.