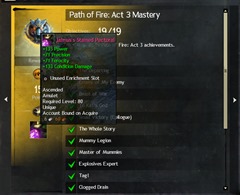 This instance has some encounters that players may struggle with.

The weapon can be found in a crate in the middle of the map, close to Brapp. 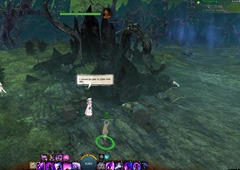 To defeat Eater of Souls, make sure you bring some CC abilities and movement enhancing abilities that allow you to get away from the boss quick (i.e. blink).

When Eater of Souls jump towards you (small telegraph circle projects the area he will land), get as far away from him as quickly as possible. This will cancel out his health drain attack on you since it is distance based. 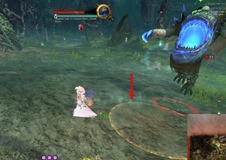 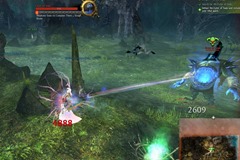 Immediately after this health drain, the Eater of Souls will start casting a circle undernearth his feet and show up with a breakbar. Use your CC ability to quickly break his breakbar. If you do it too slow, he will heal back to full HP. 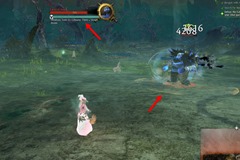 One of the more annoying achievements if you somehow screwed it up the first time. During this step you will need to follow Your Purpose and you will be shown events of the game so far leading up to Path of Fire. Never leave a memory without it finishing watching it and if you see if a NPC in the memory run to somewhere, follow it. This is especially in the case of the memory where Caithe steals the egg because if you don’t follow Caithe, the achievement will fail and you have to do it all over.

Enemy of My Enemy

Defeat Archon Iberu without ever letting him drain. When fighting Iberu, he will use his drain attack from time to time. What this attack does is that he will go invulnerable and then lift up one of his Awakened soldiers to drain its health. Kill that soldier quickly before Iberu finishes his drain channel and you will break his breakbar. Do it for the whole encounter and you will earn this achievement. The soldier being drained will have a timer icon above his head and Iberu will usually announce it in voice when the drain is happening so you can spot it quickly. 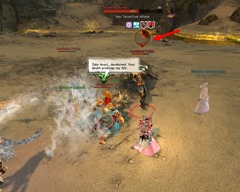 Defeat Iberu within 2 minutes. The timer is fairly lenient as long you interrupt his drain every time as doing so cause him to take extra damage for a few seconds. If you having trouble doing it solo, group up with another player for an easier experience.

Close the portal without ever switching to your personal skills. If your awakened army get low in numbers while fighting Forged near the portal, just run away and free more Awakened soldiers that have respawned. The Elite Forged that guards the portal constantly switches between melee and ranged immunity so be sure to keep an eye for his buff icons and swap between melee (#1) and ranged (#2) to counter his buff. Once you get this elite down, the portal is pretty easy to down with just a few Awakened. 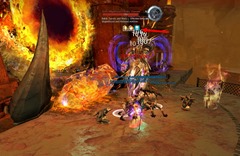 Have at least 15 mummies under your command. This achievement is really easy to get. You can just run around and look for Awakened soldiers to join your army without engaging the Forged as doing so can cause you some loss via combat. The Awakened soldier locations are all marked on the map so you just need to use the #5 skill on them to get them to join your army. There is a counter on your buff bar to see how many mummies you have amassed. If your awakened soldiers are dying, remember that they respawn on the map so you can free them again if you run low. 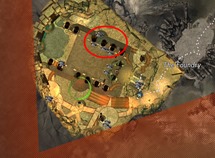 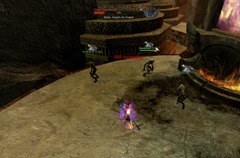 On the bottom floor of that instance are two group of Forged mobs that together is about 12-13 in number. You gather the two groups up, run around and kite the mobs for a bit to make sure they are all grouped up together (I use the nearby cauldrons to LOS the ranged mobs). Then you use your #3 skill to send one of the Awakened soldiers to attract all the Forged to him before pressing #3 again to blow all of them up once they get near. There is also a group of Forged Scavenger nearby too you can pick up for extra numbers.

You have to drain Beast of the Valley five times in a single lap of the race circuit. Some tips for doing this successfully is that you can drain other creatures on the race track like sand eels and choyas to give yourself a speed boost to catch up to the Beast. Once you drained the Beast twice, he will start dropping off crystals. Avoid them as they will immobilize you if you get too close, costing you precious seconds. If you can stay ahead of the Beast, you can avoid all the crystals and get easy drain whenever the Beast get close. 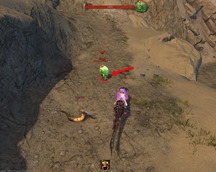 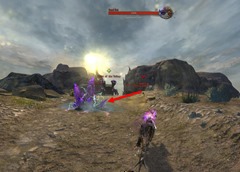 On your way to the Warbeast will be additional pylons you don’t really need to kill as they don’t shield the nearby assemblers. For this achievement you have to kill all of them on the path without dying (downed is okay). You kinda have to be really careful and run out if your health gets low. This of course means you can’t fail any of the jumps either as that is an instant kill. 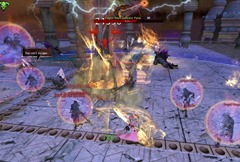 Reach the Warbeast in under 15 minutes. This achievement is really easy, especially if you not going for the Destroy Additional Pylons achievement as you can skip all the extra pylons that don’t shield the Assemblers.

Don’t get killed by Balthazar’s Ultimate Attack. Basically when Aurene is trapped, rescue her and stand in the blue circle that pop up. Use the special action key to stun Balthazar and prevent him from using his one shot ultimate attack. 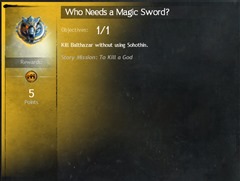 Talk to the following guests before your speech, they are all marked with the green star symbol above their head. There are 9 guests.For Canach, Rytlock, and Kasmeer, they all have long dialogues that must finish before you can talk to the next one.

After talking with Chief Imann, you will be given the option of check in with others or give your speech. Go to the three casino musicians on the stage and stand right under them, literally hugging the stage.  Type /dance and you will get this achievement. 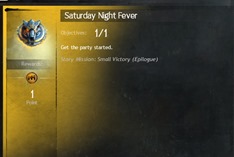 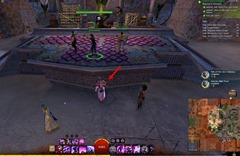