SWTOR A Traitor Among the Chiss Flashpoint and Achievements Guide.

This flashpoint can be a bit long but luckily you can skip all of the trash before the first boss (Guardian Droid). There are numerous checkpoints along the way if you die and if you make it to the first boss you can just respawn immediately next to the boss.

There are four bonus objectives for this flashpoint. Doing them at least once will complete the respective achievements. 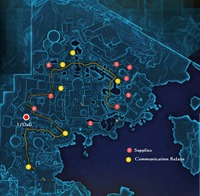 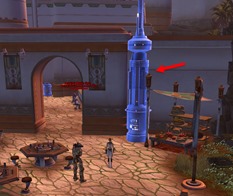 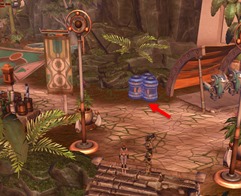 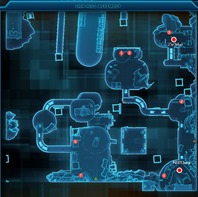 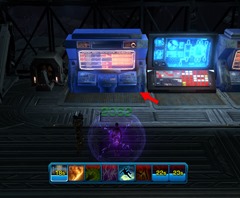 Defeat the three Operations Cheifs in the A Traitor Among the Chiss flashpoint.

There are three regular bosses and a bonus boss in this flashpoint. Remember that you can skip all the trash mobs before the first boss. Just run through Copero city and ignore all the trash mobs. If you die there are medical droid checkpoints along the way.

TLDR: Ignore the Tank Droids/Security Droids to just tunnel the boss. Watch out for the Mortar Valley attacks.

Guardian Droid’s signature attack is Heat Beam, a barrage of laser beams focusing on a single player. This is a channeled attack lasting for 5s and deals quite a bit of damage on Veteran+ modes. It alternates Heat Beams with the other ability, Auto Cannon Burst, another channeled attack, and Incinerate, a frontal flame attack.

There are also Security Droids next to the Guardian Droid. They don’t do much damage on solo mode so you can ignore them and just focus on the boss.

Past 80%, Guardian Droid gains new abilities. He will summon Tank Droids in a circle around him. These tank droids will periodically cast large yellow AoE circles that will explode after a short duration. These droids have a fairly bit of HP and tend to respawn when killed so it is better to ignore them and focus tunneling the boss while avoiding the yellow circles.

Lastly, Guardian Droid gains the Mortar Valley ability and will cast 3 red circles following a single person. You can easily move out of it and avoid the damage. 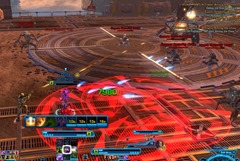 TLDR: Kill adds as they get summoned. Use grapple to reach the upper walkways and watch out for the Electro-Magnetic Charge attack. Past 25% either stay up on the walkways or grapple up in time to avoid the static charge attack.

Syndic Zenta is surrounded by Inrokini Enforcers, kill them first to avoid having too many adds later on in the fight. She will continuously summon adds to her aid: Inrokini Enforcers, Assassins, and Medics but their numbers and occurrences are reduced on story mode. There are snipers up on the walkways above you can kill by using the grapple to pull yourself up.

When Syndic reaches 75%, she will teleport up to the walkways above. Grapple up and continue the fight. She will also start using her new ability Electro-Magnetic Charge. This places double circles around the target with the highest threat and follows this person. When the yellow circle reaches the outer red circles, it will explode and damaging anyone caught inside. Players should watch out for this attack and move away from others. 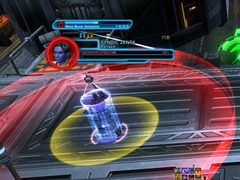 Past 25%, Syndic will drop down to the area below the walkways and periodically channel an attack called Charging Static Probes. This attack causes a massive electric field surrounding her, dealing significant damage. Ranged players can simply damage her from the walkways above while melee need to grapple up or run up the walkways from a nearby ramp. The charging up animation has yellow arrows pointing up as a warning.

TLDR: Interrupt the support droid’s Calibrating Weapon Systems as much as you can. Avoid yellow/red/fire circles.

This is a bonus boss right before the Caves. Instead of going left to the cave, you take the bottom route from Factory Loading Docks and you will land on a circular platform with the Strike Team Walker. 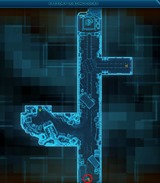 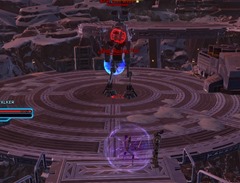 The first thing you want to do is keep an eye on the Support Droid right behind the Walker. This droid heals the walker and also give the walker a stacking damage buff via a channel called Calibrating Weapon Systems. Both the heal and this buff channel can be interrupted. The support droid itself is immune to damage.

The walker itself has three attacks: Orbital Laser, Shock and Awe and Rain of Fire.

Orbital Laser is a cluster of three yellow circles on the ground that are easy to avoid.

Shock and Awe is a channeled bombardment usually on the tank where the walker will mark the area with a red circle and continuously bombard the area for the duration of the channel. 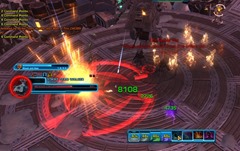 Rain of Fire is the most deadly attack from the Walker. This attack has no cast or channel and tend to get spammed. There will be a red circle preceding the area of the attack and then the area will be covered with fire. You have to get out of the fire or take massive damage. Luckily this seems to target tanks most of the time so other players don’t have to worry as much. 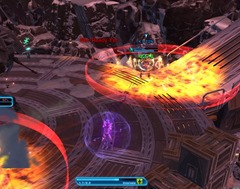 You can easily bypass Temple Guardian by using the fruit in front of him and throw it at the Guardian. This will make the boss friendly. However, if you kill this Temple Guardian, you can get a hidden achievement called Overkill. Note that however this may bug out rest of the instance, forcing you to restart. The Temple Guardian has 3 mil HP and hits extremely hard even in story mode. 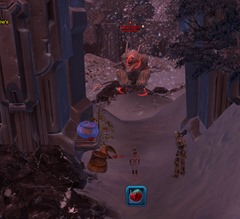 For the next part you will need to retrieve a candle from the upper right area of the Ancient Ruins. There are three doors but only the left most door contains the candle. The rest all spawn droids. 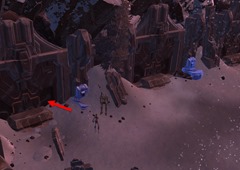 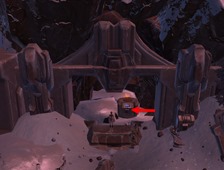 Once you have the candle, go back to the pipe at the area past the Temple Guardian and interact with it to melt the ice wall blocking access to the next area. 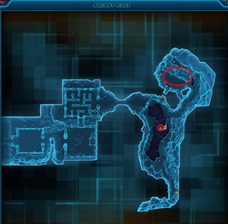 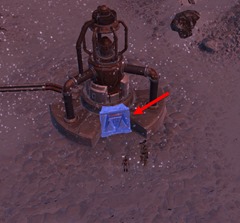 You can easily run through the maze by using your minimap. The lasers you can simply run past them as they don’t hurt. Once you get out of the maze, there will be three pipe objects you can click. Clicking the middle one will unlock the door to Valss. 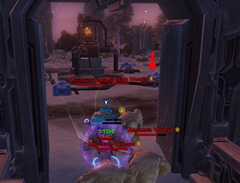 Valss likes to start off with Mine Volley, a 17.5s channel where he shields himself and drops mine all over the area. If they are not triggered within a few seconds, they will all explode harmlessly.

The other attack he likes to use during this phase is the Adegan Crystal Powered Shot, an unavoidable attack on the target with highest threat.

Past 65%, Valss enters melee mode. He will frequently spawn 2x Whirlwinds and at the same time pull a random group member into an Orbital Bombardment circle and force choke them inside. You can use a stun breaker to break out of the bombardment. The Whirlwinds are immune to damage and will seek out players and pull them to within melee range of Valss. 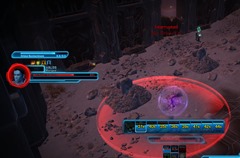 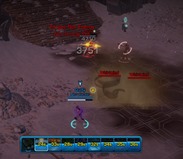 Past 33%, Valss will disappear unless you are within melee range of him. Ranged DPS will need to stand next to Valss to be able to see him. Valss also have a knock back called Blizzard Bust that will push you away from him so you will need to run back to him right after or he will disappear.

Numerous decorations drops off this flashpoint.