A guide to the Souless Horror boss in Hall of Chains raid wing.

Having a Scourge here can help as they can drop down portals to get the group across the Surging Soul walls. Additionally, they can use Epidemic to kill the Tormented Dead golems. However, Scourge Portals should be only used as a clutch mechanic as they are not really visible with all the AoEs on the ground and can cause wipes if the group is not coordinated.

Druids here can bring Tides to knockback the Tormented Dead and longbow for additional knockbacks. If you are bringing longbow, make sure to have the Marksmanship trait that allow you to pierce enemies with your arrow as otherwise the boss can block some of your shots. DPS check isn’t very tight here so you may get away with having 3 druids if the healing druids are too overwhelmed with healing to do the mechanic.

You will need to have CC skills for this to deal with the CC that occurs regularly starting at 66%.

There are red and green circles right outside the fight area. Stepping on one of them will allow you to pick up their buff and gain a special action key. Both players picking up these items will become the main and offtank on this fight. Toughness does not factor into tanking here. The player with the red buff will always take the aggro first. The Soulless Horror will cast a stacking debuff on the main tank called Necrosis, it increases the damage and condi you take from her for each stack. This is a tank swap mechanic where the main tank need to press their special action key and press it to the offtank before the stacks get too much. Depending on your gear set, you might be able to take 3-6 stacks. There is a cooldown of 45s on the special action key (it is affected by alacrity) 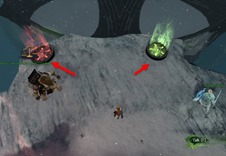 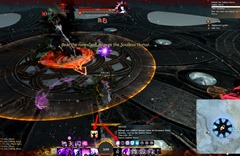 The main tank will have a purple icon above their head similar to the fixate mechanic on Slothasor. Stacks wear off after 30s so the offtank can grab the boss immediately after their stacks wear off to prevent too much stacks from accumulating.

Elite Flesh Wurms surround the boss on the platform. They are just adds that only come into factor at the beginning of the fight. You can move the Soulless Horror next to each Flesh Wurm and just kill them via cleave (or Epidemic from the necromancer). These Flesh Wurms will use Wurm Spit attack that hits for ~7k damage.

This AoE occurs pretty early into the fight and reoccurs on a regular interval. It is a donut type of AoE centered on the boss. You will see a red circle at first with an inner circle that expands to fill the other circle, you want to dodge into the boss when you see the inner circle about to finish expanding as the next pulse of the AoE is donut shaped with a safe spot in the middle. Guardian can use Aegis to block this for the entire group. Avoiding this attack is part of the Grave Dancer achievement.

The inner ring attack does less damage than the outer ring so if you can’t avoid both, eat the inner one and dodge the outer one. 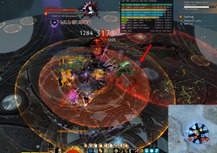 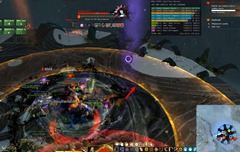 Hurricane Slash is her other big AoE you need to avoid as part of the Gave Dancer achievement. There are two versions of this, both center on the boss.

The first type of Hurricane Slash is a set of two AoE patterns. This is very easy to avoid due to the large gap of safety in between. The second AoE will always be in the same place as the safety gaps of the first so you can just side step to where the AoE pattern was for the second pattern.

The second type of Hurricane Slash is more difficult. It is basically the two AoEs from the first set together. It covers more area with smaller safety gaps in between. You just need to move away from the boss so there is a larger safety gap (or just dodge if you are unsure if you will get hit or not).

Fingers of the Dead

Fingers of the Dead is the third AoE attack from the Soulless Horror. It is basically a bunch of mini circles on the ground that will damage you and corrupt 1 of your boon into conditions. There are two patterns to this attack, a concentrated frontal cone and a more widespread arc.

Surging Soul is the mechanic of the fight that makes it a bit RNG and more difficult than just a simple tank/spank. It is a a smokey death wall that can come from any direction and be any of thee patterns. If you get hit by it, it is an instant death. The only way to safely get across them is via Scourge portals. Invul/Distort etc do not work but Blink/Jaunt do work. The walls all go in the same direction in a line and once one set of walls go through the platform, another set will spawn right away.

The three patterns are: single short tall, double wall with gap in between and triple walls joined together with small gaps on the edge.This makes for 8 different patterns: (—oo, -o-o-, –oo-, –o-o, o—o) and their mirrors (oo—, -oo–, o-o—).

The pattern with the three joined walls is obviously the hardest since you will need to run all the way to the edge to avoid it. All Surging Soul walls disappear during the CC phase on the boss.

Surging Souls do appear as icons on your minimap so you can use it to see what pattern comes up next.

The second hardest mechanic to this fight is the Tormented Dead. These are flesh golems that spawn every 20s past 90% They have low HP and die easily. However, when they die they drop a big red circle on the ground, corrupting all boons on anyone caught inside. You pretty much get condi bombed if you don’t move out fast enough. The red circle also lasts for a while so it can take out space on the platform for your group.

They also seems to be fixated on the offtank on spawn. 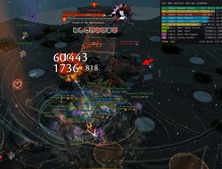 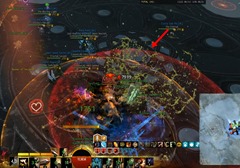 To deal with this you need someone who pushes/launches it away from the group while rest of the group (i.e. a  necromancer epidemic) kills it from afar so the red circle doesn’t drop right on top of the group. Ideally you want the group closer to the center and pushes the Tormented Dead away to the edge of the platform (you can pushes them to the part of the platform that has fallen off, they won’t die since they can still use the platform).

Spinning Scythes spawns periodically on the fight platform. They have a small AoE circle that will corrupt boons if you touch them. Otherwise they are not too troublesome unless they run through the group. There could be as many as three Scythes up at a time. 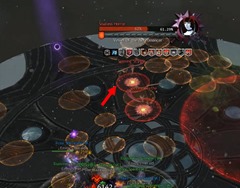 The platform will break off on the edges and becomes smaller as the fight goes on. The first break off occurs around 7:30 on the timer and then occurs again at 66% and 33% of the Soulless Horror’s HP. 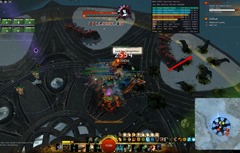 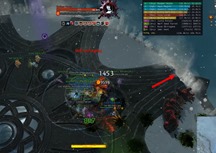 There is a yellow circle that appears shortly before the platform breaks off to give you a warning.

The CC phase starts roughly at 66%. It will remove any Surging Soul walls that are up on the platform. You need to break her breakbar within a few seconds or everyone will be feared off the platform. After 66% this CC phase occurs roughly every 1 minute and at 33%. 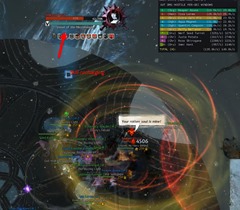 Special thanks to Sick Kents [Sk] and two [NA] lads for the kill.