Yavin Ruins is basically a reskin of the Alderaan Civil War map with identical three point capture mechanics. The difference is the scenery, cross-faction and a speed up mechanic that can turn the tides. 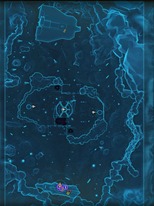 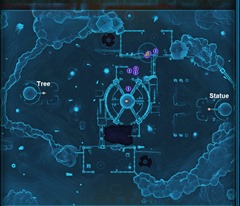 The central area is very similar to Alderaan Civil War’s center. You got an objective that you need to click to capture (takes 8s normally) and doing so will focus the turret on the enemy’s ship. Unlike Alderaaan, however, the objective you need to click is only on one side (it is a small panel). Also like Alderaan there is an upper ramp section that allow you quick access to the turrets on either sides and plenty of cover to LOS.

Below the center arena is also a tunnel exactly like Alderaan that allow you to quickly get to the other side but it houses a very important mechanic. Inside the tunnel is a yellow pickup. This pickup grant you a buff for 1 minute and 15s that is very powerful. It shortens the time it takes to capture the turret from 8s to 4s. This makes it very risky for a single player to guard a turret as an enemy player with the buff can easily CC you for 4s and capture the turret you are guarding. The pick up also have a short respawn time so it can be used frequently.

The two ends of the map houses the tree and statue sides. One end has two rows of statues while the other side has trees instead of statues. One team will have an easier access to one end and need to go through the center to reach the other end much like Alderaan Civil War.

Each turret you capture will deplete enemy team’s score by 2 every tick. If you have two turrets, the scoring will tick down twice as fast. Each side starts with 600 score and once that score goes down to 0, the match ends. Since this is a cross-faction map, one team is purple and the other team is yellow.

It’s already messed up because the nodes on your scoreboard don’t match up to how you load in. We as the purple team had the left side and the middle but on the scoreboard it was Left Yellow, Mid Purple, and right Purple. Very confusing….it should always match the way you face when you load in so you can determine which way to go.

I know what he does you chimp and he sucks at his job, similar to how im sure u suck at life <3

“Kiss, kiss that ass. Make it shine, as you continue to whine…..”

He doesn’t make the game he’s just the head cheerleader for the shit show so he deserves scorn just like all the other scrubs responsible. Every one of them is as useless as socks on a rooster.

It’s a really good reskin of civil war. I like how they added the stairs and narrowed the corridors between mid and the other nodes.

The scoreboard does need to be fixed to match the map.

what a crap ability, really 1min and 15 secs last is huge, also 4sec? even with 2 to guard the terminal 1 stealth class is enough to capture it, while non stealth classes have lower cc secs

Looks stupid. These guys are a bunch of emo bitches.

You have the vocabulary and thought process of a 12-year-old.

Careful; he might tell on you when his mommy gets home. 😉

“One team will have an easier access to one end and need to go through the center to reach the other end much like Alderaan Civil War.”

If you’re going to recycle the map… why not change the game play so it at least *feels* different.
IE its a civil war map reskinned but now its Huttball.
/sigh

I would like to see them implement a capture the flag system. Sneak into the other teams “base” and steal a data cube and run it back to your base before they kill you type of thing.

Nothing more awesome than getting reskins in MMOs for your money.

I wouldn’t mind reskins of current warzones as long as they don’t take two years to put out.

I do miss the days when this game was important to me. But,to it’s credit, it’s a 6 year old game that I started to follow religiously 7+ years ago. Life is hard enough to hold on to something with the same zeal for 7 years, let alone a video game.

I haven’t logged in consistently for over a month and I only miss it sometimes. I was a big pvper and outfit collector and I do miss those aspects. I hope they make another Star Wars MMO, because this one is clearly on a downward path. It’s too much same ole, same ole.

They could easily introduce more variety just by changing the lighting and weather on a few.

Not complaining… Alderaan Civil War is my favourite warzone.

Honestly, if they were gonna do a reskin, this was the way to go.

It’s a new map that adds cross-faction teams. It’s a good thing that they didn’t just make civil war into a cross-faction match. This gives it a little bit of variety.

I wouldn’t mind if they did the same thing for Voidstar, tbh. Though, perhaps another voidstar type warzone that, well, isn’t merely a reskin might be preferable.

Well said. I wouldn’t mind all the current maps being reskinned and cross faction. It adds variety. I also like that you can go to the middle from the outside without having to run around that damn wall like you have to in Alderaan.

I guess they were too busy pushing homosexual romances and gambling packs to do a brand new war zone.