In this week’s This Week at Bungie, Bungie teases some of the upcoming changes to Nightfall and Prestige mode for raids.

“Do you see the stars flutter? Now listen. They scream from the lacerations of our enemies. The balance has been threatened. Nightfall is upon us. This burden of Light has never been heavier. We can sleep no more.” — Ulan-Tan

Last week, we published a Destiny 2 Development roadmap, to forecast some changes coming to Destiny 2. You may have noticed some changes coming to Nightfall strikes. The Nightfall has been the subject of a lot of feedback since launch. Many of you felt that the timer was pretty stressful and preferred being able to slowly work your way through the challenges at your own pace. We plan to address this feedback with upcoming changes.

Before we get to the details, Game Director Christopher Barrett has some context to frame up the essential fantasy that we’d like for the Nightfall to serve.

Barrett: Nightfall should be a challenging test that only the bravest Guardians dare face. Fireteams of any size should be able to participate, from organized clan groups to skilled solo players. Players should be able to determine their own challenge level, by going slow and steady or fast and wild, with elective modifiers to test the most hardcore veterans. Your final score will separate the best from the rest, and with high risk comes high reward. Each terrible villain that players face should have a very rare and powerful unique item, themed to them, that tumbles to the ground as they collapse into a pile of bones. Conquering Nightfall should be a badge of honor, with the best players able to show off their achievements with new dynamic emblems and exclusive auras.

That’s the vision of where we want to take Nightfall, you’ll be seeing the first of this direction in the next patch, with more being added over time.

With those goals in mind, we asked Designer John Favaro and Senior Design Lead Tyson Green to share some facts on how they plan to enhance Nightfall strikes.

Tyson: As we are working on new sandbox improvements, we recognized the need for a venue in which those improvements matter more. The weekly Nightfall, especially on the Prestige difficulty, was intended to be such a venue, but the controversial time limit mechanic is a simple pass-fail mechanism. It only acknowledges success as being a clear, with no degrees of success past that, so no competition exists in that space. It turns a lot of people off of Nightfall too, since it is both difficult and indexes performance solely on speed. 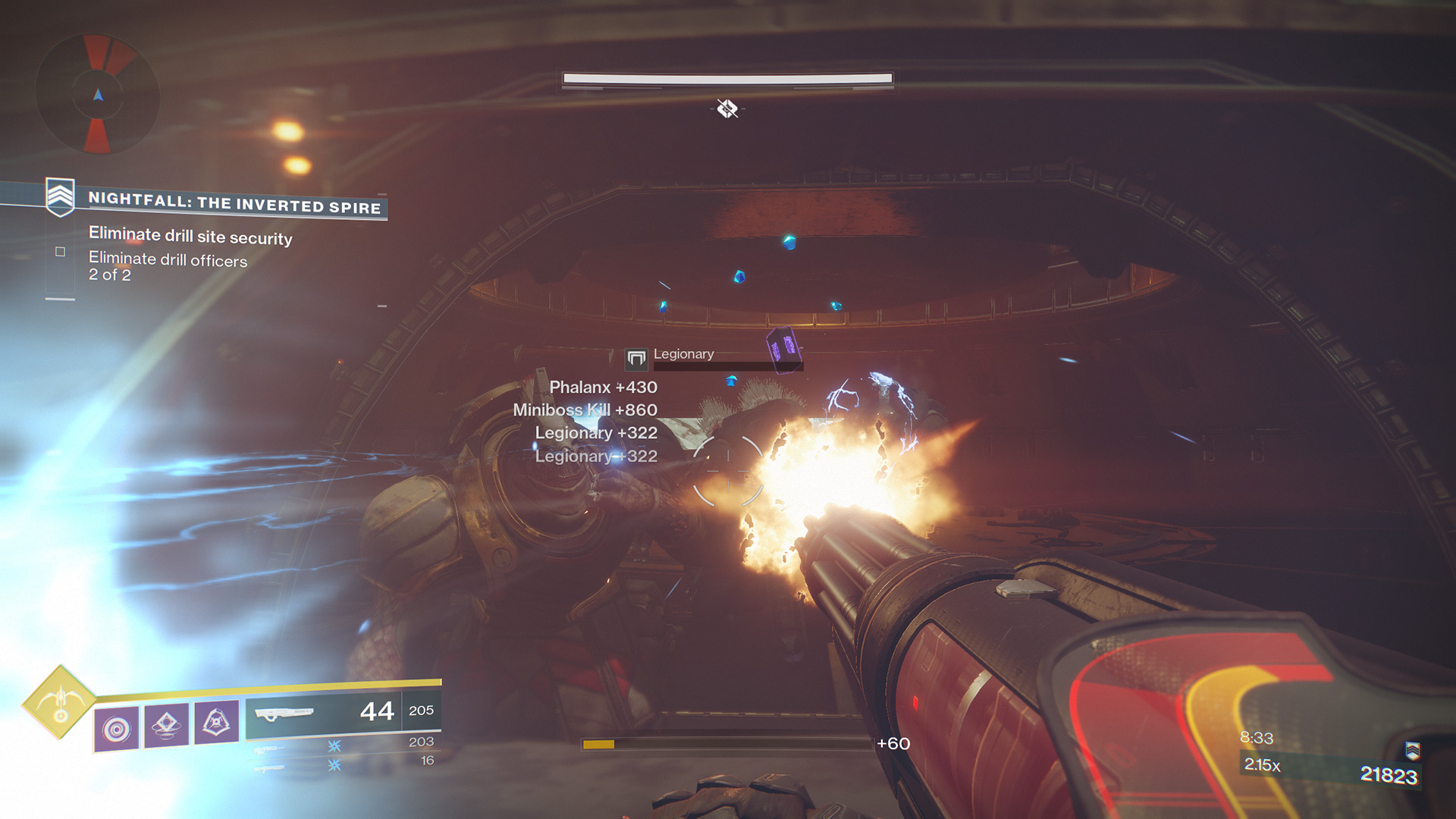 We are repositioning strike scoring in Destiny 2 to enable you to achieve something prestigious in the weekly Nightfall and as a way to amplify difficulty. The new scoring rules are intended to be better at a few specific things:

On top of the above mechanics are Challenge Cards, items that offer ways to boost the challenge in exchange for score multipliers. In 1.1.3 there will be a challenge card that drops from completing a Nightfall run. It has some customization options to help tune the challenge level to what you and your fireteam are capable of. 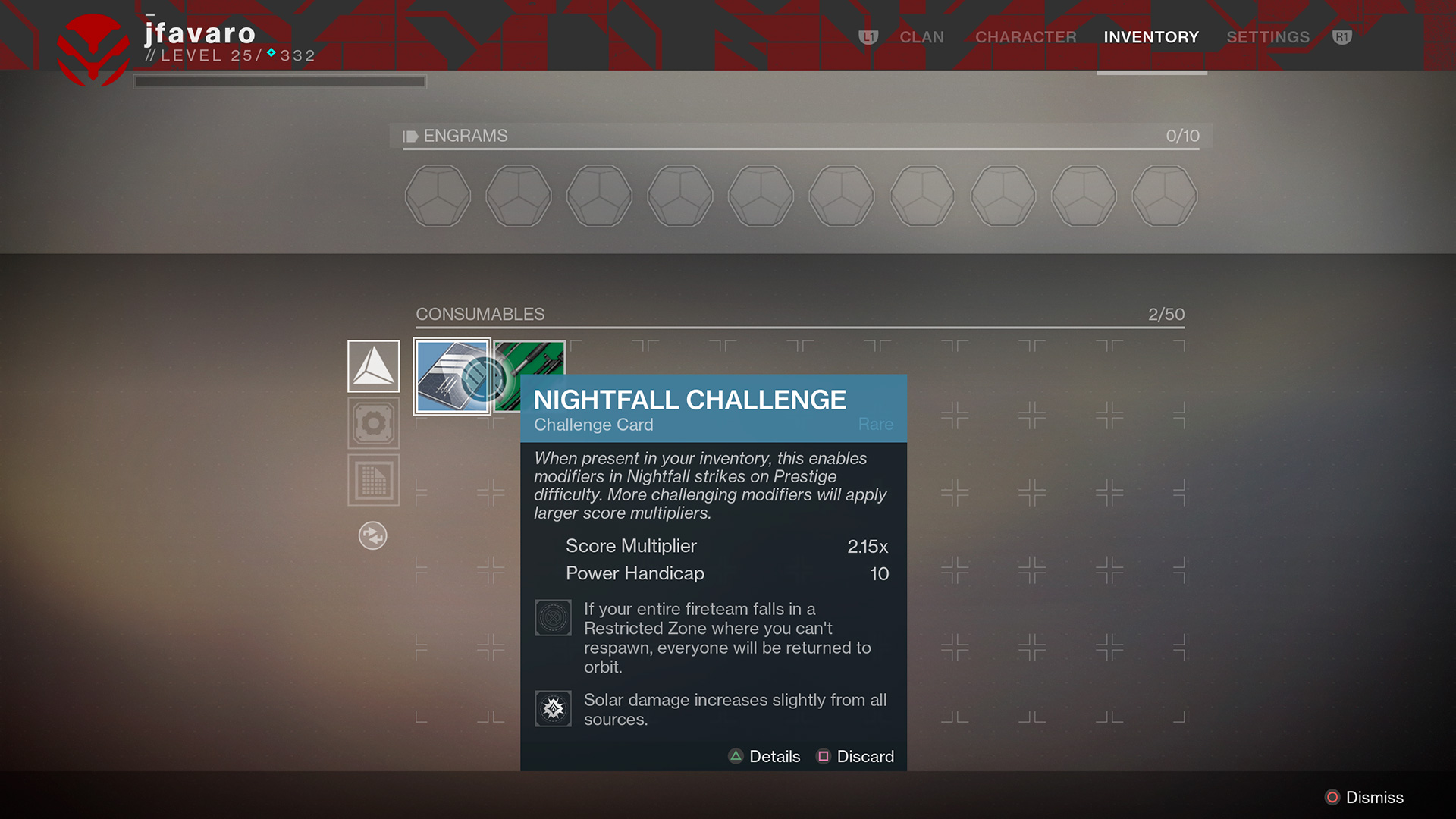 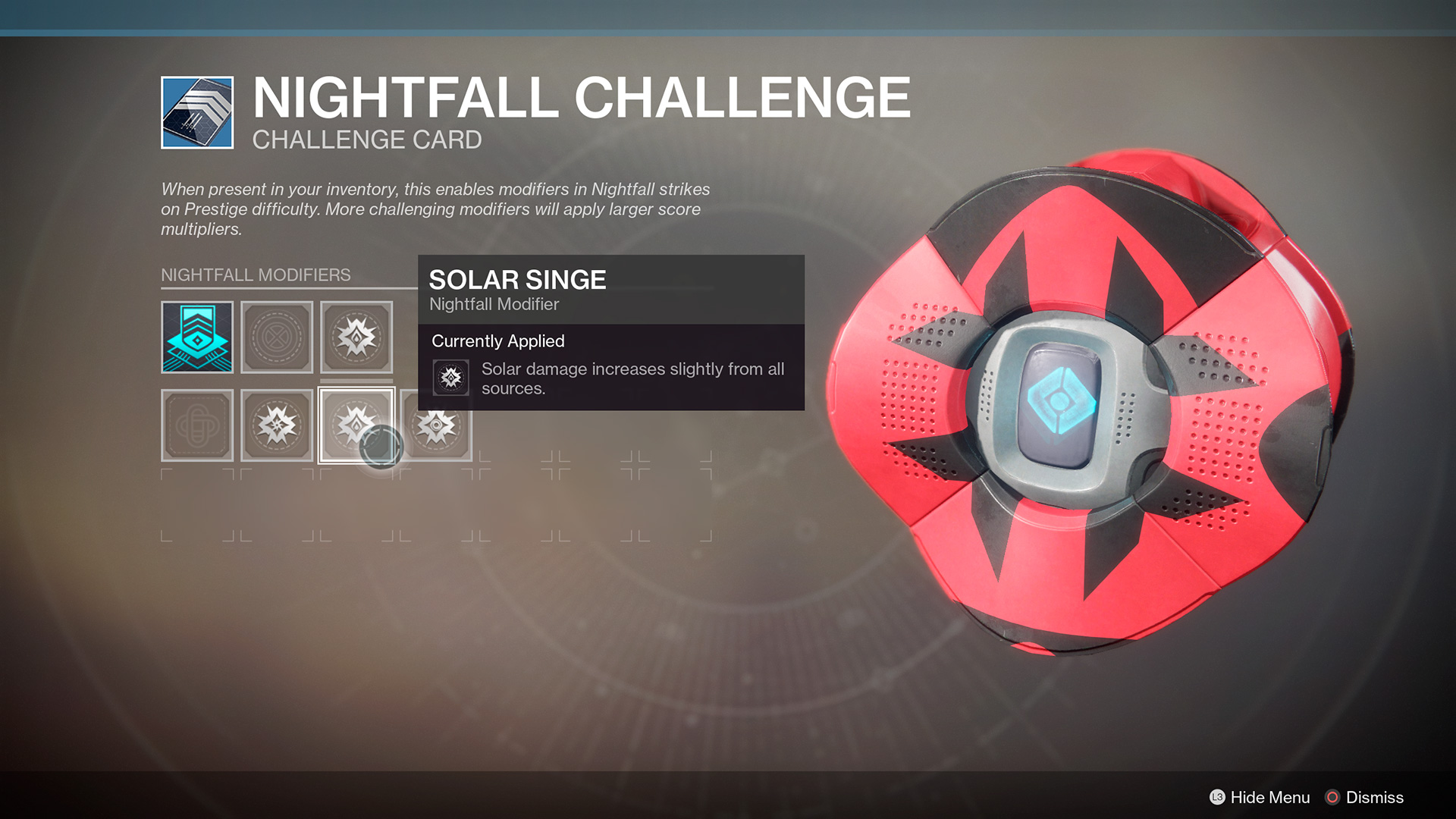 Players will be able to see their (and your) scores on new Nightfall Emblems available as drops in each Nightfall strike. These emblems (and others like them) are now the source of auras, which are automatically enabled if your personal score is above a global threshold. At first the thresholds will be set based on what we think might be tough for players to reach, but we look forward to you showing us how much we underestimated you. Then we can raise the bar based on community scores. 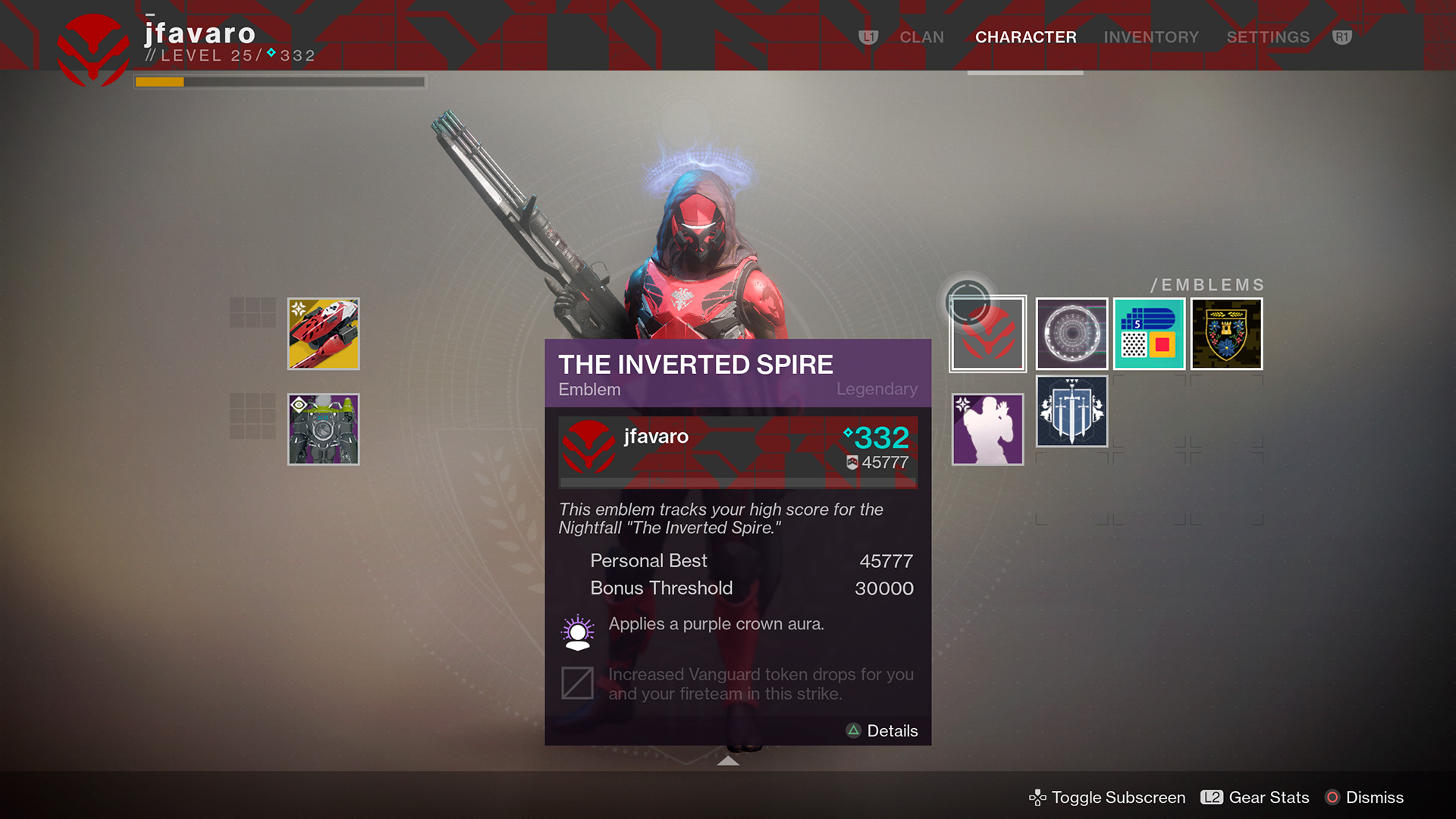 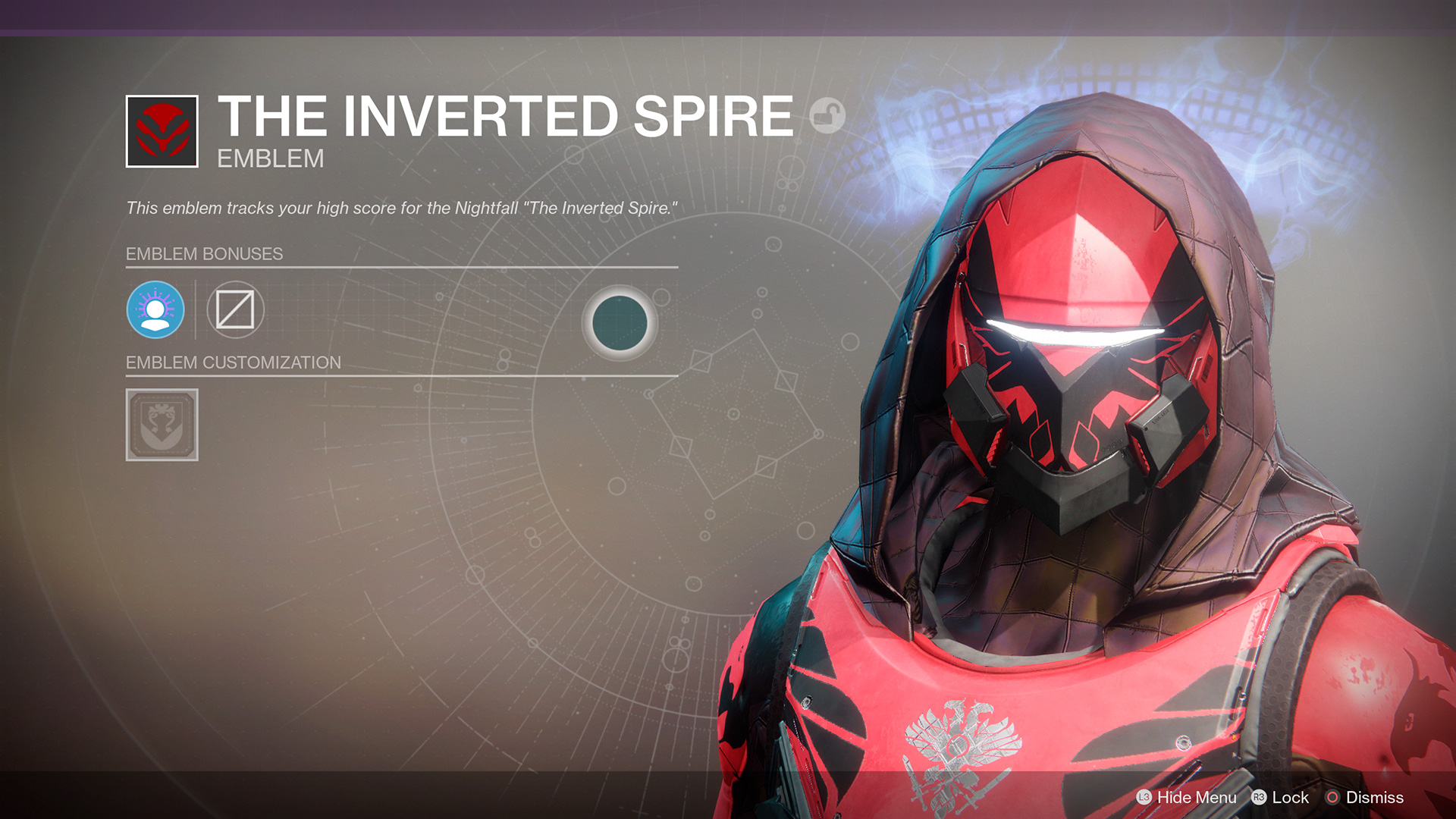 Along with the aura, a personal score over the threshold will also unlock a fireteam-wide buff that boosts Vanguard Token drops in that strike by 25%. When your fireteam sees the Nightfall Aura on your head, they know who’s hooking them up.

Lastly, some rarer variants of these Nightfall Emblems will be available as drops at higher score thresholds. Obtaining these rewards is meant to be challenging, so we don’t expect everyone to reach these scores or collect these items.

Update 1.1.3 will have a first pass on this feature. Before we can call it a competitive activity, we need your help pushing the limits and finding where it breaks. Future updates will react to your input, as well as add more rewards and recognition to posting competitive scores. We also hope to extend the Challenge Cards to support more difficulty customization and deepen the scoring options. All of the feedback you give us in this release will go into making our upcoming releases better. Thank you in advance!

Designer John Favaro has some additional info about what you can expect from the new Nightfall modifiers in the Prestige mode.

John: The current Nightfall climate encourages play that pushes players through the encounters as fast as possible, focusing on extending bonus timers, and skipping encounters unless they are required, which was more stressful than fun. With Nightfall strike scoring, we were looking to give players a little more control, allowing them to modify their experiences to provide them the challenge they want and incentivize more methodical progression through the activities. People like big numbers, and the best way to get big numbers is to kill everything. We’ve been listening to the community’s feedback, and this is our first step in making a few improvements. We’re hoping you’ll put some time in and let us know how you feel. 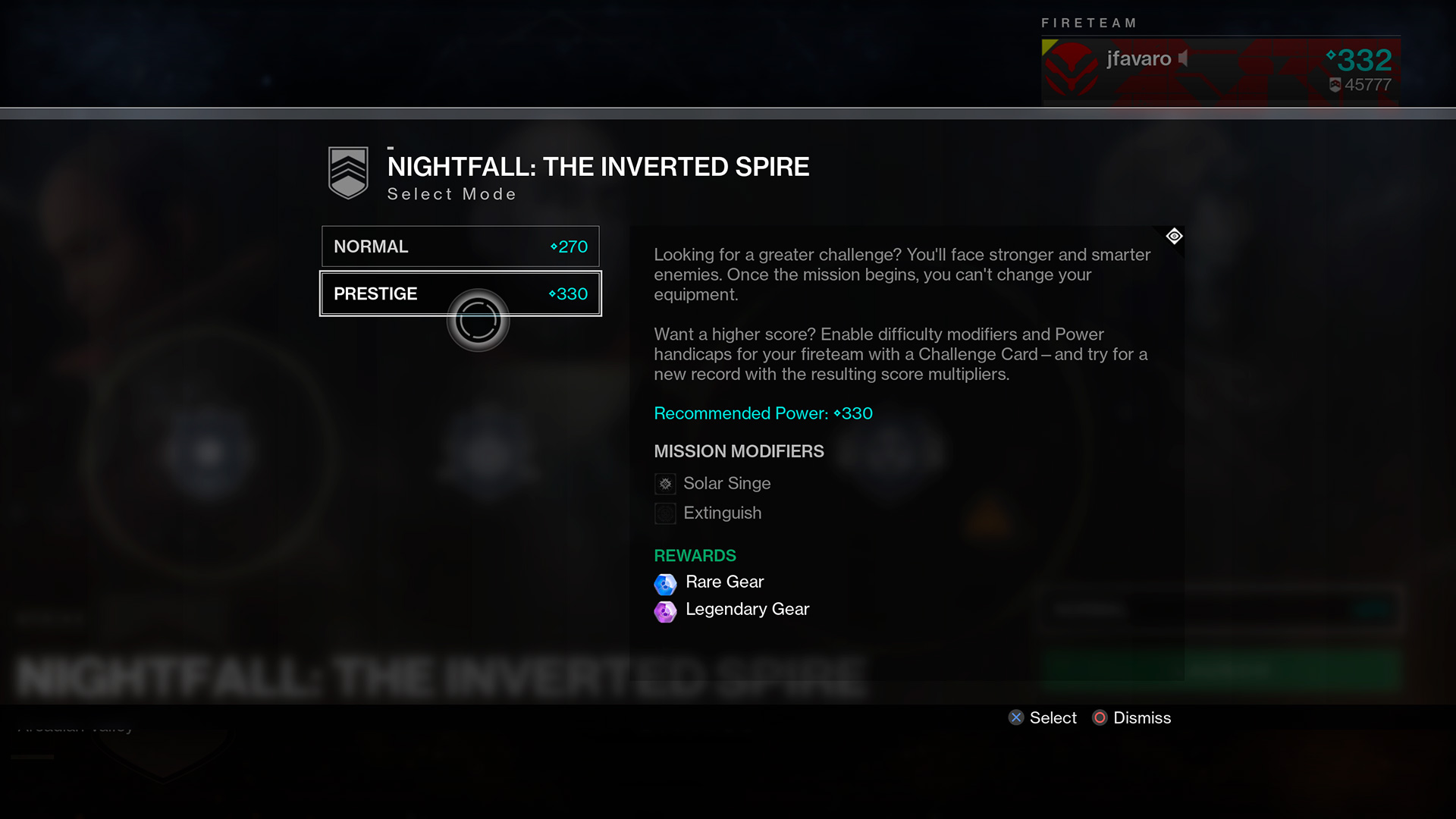 The modifiers will apply a multiplier to your score in the Prestige Nightfall. It isn’t all more, more, more though; there are plenty of ways to lose points. There is an ever-present score bleed to apply pressure to keep you moving, and a timer that will reduce your multiplier if you take too long. Here are the current modifiers we’re going to ship in this first iteration:

These are just our initial modifier offerings. This release is focusing more on how the system as a whole feels, so we can get feedback on the core experience to fine-tune it before we dive in head first to creating additional modifiers.

There you have it. If you still enjoy the thrill of racing through quickly, you will be rewarded with a higher score. If you prefer to go in solo and take your time, you might lose some points, but will still finish the activity and collect a reward. You can complete the normal Nightfall and get a score, or you can take on the Prestige Nightfall and ratchet up your score with some modifiers. We’re eager to see you jump into the new Nightfall and give us feedback on these changes.

Another thing that may have jumped out at you as you read the Destiny 2 Development roadmap was that the Eater of Worlds Prestige mode was pushed out until May. You may have even said, “What is taking them so long?”

It’s a fair question. The answer is that we didn’t want to release it in its current form. Before rolling it out, we thought we could add some more flavor to this special activity that will make it worth the wait. Here to tell you more about our plans for raid activities is Senior Designer Joe Blackburn.

Joe: Hey, Guardians. For Destiny 2, we wanted to release raid content on a more regular cadence than we did during the first years of Destiny. In our original estimation of this work, we knew we would have to focus on normal modes, forgoing Lair challenge modes, and having their Prestige Modes rely on enemies that are more lethal and harder to kill.

As we got closer to releasing Prestige Eater of Worlds, we knew we wanted to do something more. Over the past few months, we have been prototyping a new way of adding difficulty and replayability to raid activities. Today, I’m happy to announce that we have decided to push this feature forward and release it for all the Leviathan Raid Content with the release of Expansion 2.

Going forward, all raids will all have a normal mode active at all times, and each week one raid or Raid Lair will have a curated loadout mode.

This new version of Prestige requires players to complete raids filled with deadly enemies using a curated loadout of weapons and a special modifier that enhances the way you play. The Raid Team never likes to let you know exactly what to expect, but let’s look at some hypothetical examples. These are not the plan of record, but they give you a basic idea of what you might find.

Modifier: Conduit. Each kill you get before reloading or swapping weapons gives you increasingly more ability energy.

We should also note that, while Eater of Worlds is not getting any specific encounter changes, all the previous Prestige changes in Leviathan will be active when players engage in its new loadout difficulty.

This is currently slotted on the roadmap for May, but this is a major overhaul and could be pushed out further. We’ll keep you updated.

We can’t wait for you to play it, talk about it, and help us make it better for years to come.