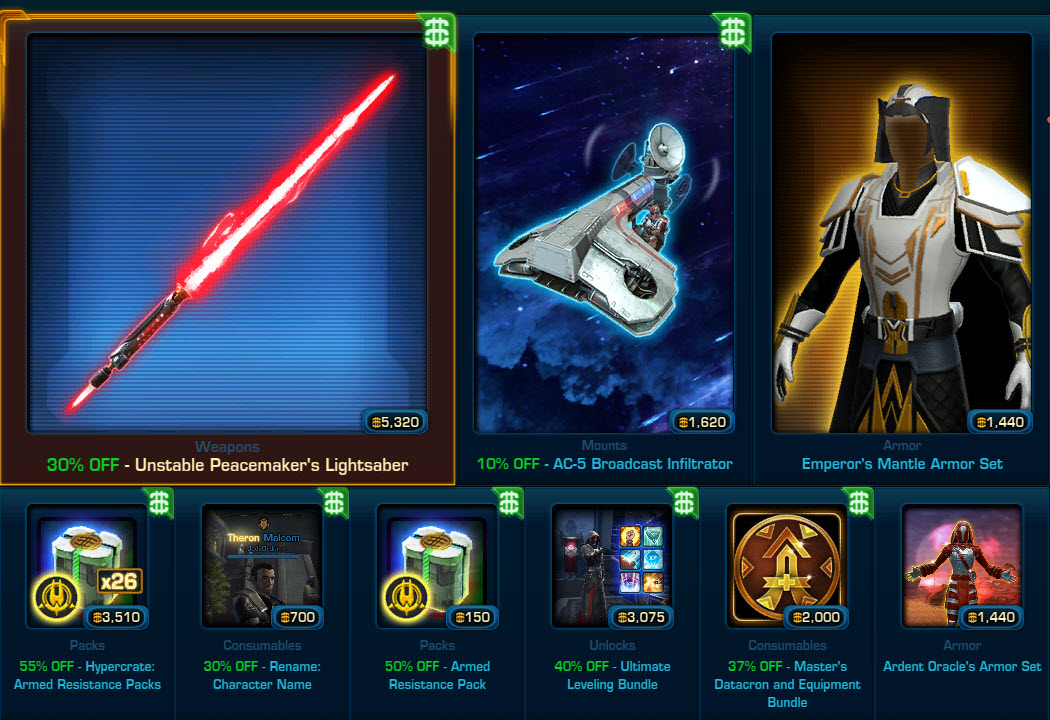 It’s more exciting than the road-map though.

I see the actual content they’ve been working on is being advertised. 😉

No, you’re the second bot…

And the unstable Peacemaker Lightsaber returns. After this I will officially have nothing else to buy from the halls of Greedy ass EA. I hope Disney rips this game from your bleeding fingers you maggots.

I was so close tu renewing my subscription. Thanks for waking me up, Musco et consortes. I have this lightsaber already, but I don’t like the feeling that you only care about money and try to trick people into subscribing or buying cartel coins with real money. Milking people like that is just wrong and bad for business. I’d be much more subtle about it.

I dont know man, SWTOR really holds no interest anymore, maybe upcoming patches will do something about it, i been playing this since 2012. I’m searching for another MMO, i had such hopes for Black Desert, nice graphics and setting, but i was pissed off when i checked that the whole game is about grinding. SWTOR might survive longer if they were able to do unlimited warzones for everyone like they promised 4 years back, i remember it clearly. There is just not much things to do, especially if you are non-subscriber. I do like it, i really liked PvP in this game and all, but i dont really want to subscribe just because of it or grinding credits for buying passes, these passes btw worth more than F2P or prefered players cap, so just, em no ty.The perfect MMO in my opinion is if it was completely like SWTOR and had graphics and character creation stuff from Black Desert. Star Wars universe is also awesome, you can do so many things with this franchise, but there are no good games. Two of the battlefronts are completely garbage (well okay, the second one is better, its not that boring like the first one was and have more content, but we know its issues as well), i wanted to buy it, but i’m worried about its population, who knows how many are there and how many will be in a near future, even in some months. The first one died out, 1k people at max, but at the moment i’m writing this its just 319 people in the game. You can check it yourself at swbstats website, shame there is no website like this for the second game, the guy who created it simply said he dont want to waste his time on making it, because its fate is quite clear anyway. So and there is SWTOR. I’m not talking about old games like JA and old original battlefront 2, because its just pointless. So the only games that are active is Battlefront 2 and SWTOR. I’m not playing SWTOR and i decided not to buy battlefront. I really wish there could have been more games. If any dev reading this (haha its laughable but who knows, maybe) know this: SWTOR was perfect and it was the best MMO, better than WoW or else (IMHO), if you are about to create a new one, make sure it have nice graphics and decent character creation (like in Black Desert). I dont want SWTOR to shutdown because have lots of memories in it, but if everything will stay the way it is, i will only be praying for another MMO. Right now there are no good ones, i still prefer SWTOR amongst others, because its still have its stuff. F2P restrictions arent that bad like in the other MMO, its good and playable, like a starter pack, if you enjoyed the game you can subscribe and get the rest of the content as well as level cap, thats awesome. Make unlimited warzones like you were promising 4 years back and the population will keep more stable. https://uploads.disquscdn.com/images/ad914710e2fcb7e0e06697875f648e0e0ba415f3e249f944557190317326ddfd.png

New content on time. Over 5k coins for single item – seems worth it…

Just put the best raiding gear on the Cartel market for 5000 cartel coins and my shekels will belong to you EA.

Another quality update to this game! Man this game just pumps out content week after week!

These aren’t meant to be content updates- I’m not sure where people are getting that. xD
Dulfy uploads these as the Cartel market Stock gets switched around- It’s literally the equivalent of getting a Walmart brochure in the mail.

Sarcasm appears to be lost on you.

Look at what that sarcasm denotes, mate. xD
Sarcasm was complaining that Cartel Market Updates weren’t new content.
Response said that you shouldn’t expect new content from what’s essentially a weekly shopping brochure. That’s what these scheduled posts are. x3

Yet it still went sailing right over your head. However you like.

Therefore, if you are willing, I would like to sell you a magnificent Gungan Swamp Stronghold for the low low price of 14500 Cartel Coins, and it only costs 28000 to unlock the rest of the rooms! Please let me know your response by messaging me as soon as possible on this board!

Subscribed once- Never spent a penny on the game beyond that. =P

I know a few kids whose lunch money is going to better use this week.

How many CC’s can I pay to buy a real Dev team? I got the money, just give me a price EA.

What will you do then? Ask Disney to bring it back? The game is already on it’s way to closing. Unless EA does a 180 and decides the game is worth putting their money into making it better …..LMAO on that idea

It’d be hilarious if a SWTOR Emu ended up being better than the official SWTOR.

So the only thing you do in life is playing SWTOR? Without it you will be dead? what a pity…, go outside meet some chicks, life is not only a stupid dying videogame LOL

Don’t listen to that guy, keep showing us your money you foo…fubarz =) We need to finish Anthem. #SHOWSWTORTONSOFLOVE$$

well this game is trash now

To be fair it just the usual Tuesday re-positioning of pictures with the word ?% off after them.
However the road map was hit and miss i’ll give you that.
Good to see you Naq, hope you’re ok. 🙂

I was looking at the GW2 part of the site. It does not seem to draw as many comments as here positive or neg. Do a lot of players that play or did play SWTOR play it?

as low as this game has fallen, it has a lot of new players because is star wars

Star Wars is a draw undoubtedly, but it can keep the new players because it has tons of great stuff for new players to do and experience.
Existing players significantly less so.

I think most of the posters here don’t play but used to love it so come here to keep tabs on it’s progress.
There’s a lot of new players in the game but it has lost most of it’s regular established players, especially the raiders because of lack/slow progress in endgame content.

Think this is first time i fully agree with your post 🙂
I was NiM raider over year ago. Did all the content since beta.
Currently this game has shifted away from opsing aspect. Adding few bosses over many years of wait just wont be enough to bring back dedicated and skilled raiders.
For new players it may be fun to do story first time but they will not be there to push ops hardest challenges. A lot even say story mode is too hard… oh boy how much have things changed.

You see more comments here because:

1. Star Wars.
2. The EA/BioWare ongoing dumpster fire is something fascinating to behold and fun to ridicule.

its all about the lolz

Hey Mosco Your a very interesting troll…. Get a life ok …. Harley, Friends, and Beer …Work, House and other things Yea # get a life…. k Sir Troll

I just started it is alot of fun i just quit star wars after playing since 2012, its easy to pickup and no sub, you pay for the expansions but you can try it out free to play, checkout reviews before you buy, it comes up in alot of 2017-2018 best mmos to play.

https://youtu.be/gKlS1Oka3uM Not that this will happen ….but if EA did bring Malgus back with story and ops How long the game would last after this year…. Oh well be fun to see him take over the alliance…..LMAO!!!

Bone dragon pet in ESO !! I’m so getting one of these…ermagawd it looks awesome.

looks like they ripped off of WoW and made it worse.

PFFT WOW ripped off LOTR and made it worse. Even the names of characters and locations are anagrams and parodys of Tolkein’s work.

EA is evil. Not Bioware.
EA are the worst. They kills:https://i.imgur.com/gxR7ACI.png

Why? Just for money. Time has come for Bioware? Maybe.

Anthem is the last hope for Bioware. For now swtor isn’t a priority.

Disney
for Star Wars games? No thanks. They kills Star Wars. TFA was bad. TLJ
was (really) bad. Rebels is bad. Solo: Is it Star Wars? Really? I must
see it. Only Rogue One was nice.

Microsoft must buy EA? No? The end for EvilA? I hope.

Ok only a little thing: Bioware is no more….Current Bioware and EA are the same thing, the original crew that create swtor were fired years ago…I am the master!

“You, are master of nothing”

Only the master of evil, Keith

Oh man some amazing games in there, Syndicate, Populous, Dune, C&C Series, the early Battlefields (1&2), Monkey Island, so many memories.
When games were about playability and not graphics.

I still play C&C generals online with my bro… gotta love the 3rd party servers that run the old stuff still. Westwood RTS was the shit forever.
And Syndicate… what a killer game that was. Goin way back for that one!

I agree with most of it but EA killing LucasArts is more than a stretch. They used to answer to LucasArts as they were the reps of Lucasfilm to the game industry basically. Disney dissolved LucasArts the first week they bought out GL.

Agreed 1000%. Nice graphic to see they are video game’s version of Disney.

Rebels is awesome, as was Clone Wars. Not everything Disney is bad. Dave Filoni, who is a master, is on top of it, that’s why. I don’t trust anyone who doesn’t like Clone Wars and Rebels.

Hey whiners, “Keith” here. I see you continue moaning and groaning against SWTOR my game. What a waste of time. I OWN this game and i deliver content as much as it pleases me. I have my personal whales horde who keep this game alive so i’m not sleep deprived as you can see…bahhhhhh. So think it twice resub and join my horde instead of wasting your “precious” time here, Anthem need it…$$

https://youtu.be/FL6_uuXHP-U And the True Master of Keith arrives

https://youtu.be/rCB8DUGpYQQ They fixed Disney crap called a movie…..Now they are coming to fix your crap in the game…..:D

Actually…. this last scene with luke and rey is a lot better… OP maybe, but looks imo better

Not related we are not discussing here about Disney movies. FOCUS!