GW2 will be having a balance patch on March 27 and then release Super Adventure Box on the 29th until April 19.

It’s time to do a little spring cleaning, so wipe the floor with your rivals in PvP League Season 11! The season begins on April 3 and will end on May 29.

In preparation for the season, we’re releasing a balance update on March 27. 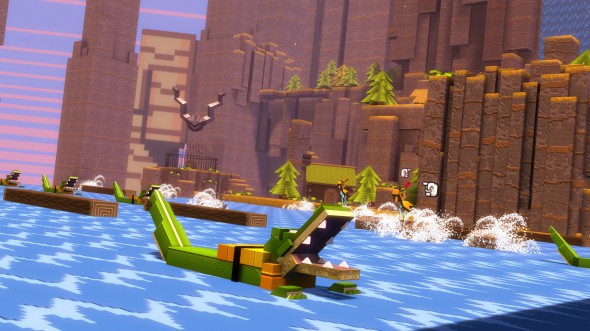 From March 29 to April 19, Moto will open the portal to his greatest achievement, the Super Adventure Box, for the annual Super Adventure Festival! Get ready to jump around.

Sadly, it’s not very likely. I’d love it if World 3 made its debut, but more likely it’s the same, with maaaaaybe some new rewards. (I say maybe because you can only earn about 2-3 Crimson weapons per year, and with 16 weapons, it would take you at least 5 years to collect them all, which fills the role of giving players something to do with SAB annually.)

They have so many new movement mechanics that they could play with now. I hope they one day expand SAB, its got so much charm.

Neat. Lets see if I have the energy to finish storm wizard infusion this time. :v

My Infinite Continue Coin is ready!

Time to get that fucking pixel cat

New color for weapons but no world 3 i gess?

So dissapointed, no new World 3 announcement. I mean c’mon! People have been waiting for World 3 like forever!

You didnt even mention us, the dungeoner… deep down inside we are dead but still hoping for them to change their mind.

a bear would be awesome 🙂 I want a black stallion for my warrior … or like a Clydesdale for my Norn (big work horse type thing lol ) .. I dont think we are ever going to see horses though :/ I would also like a Raven skin (Griffin) and a Tiger (Jakal)

Agreed. SAB mounts would absolutely kill immersion for me. But, I wouldn’t put it past them to implement this.. They already have SAB gliders, and flying chickens that carry you on a rope..

Yea, luckily you don’t see the joke gliders too often.
But the rainbow glider is quite common and its so damned ugly and noisy

I used the joke glider until they released a more realistic holo-glider for my asuran engi. Plus the random cluck/baby sound helped break the grim mood of some junior raid groups after failing vg and jumping off the airship again and again.

SAB mounts would break immersion but it would be a cool starting point to building some scarlet themed aethertech holo-mounts – or it would have been if anet hadn’t decided to lock all mount skins behind the gem wall -.-

Is that Red vs. Blue banner some gemstore item being hinted at? Possibly 2 new 2h hammer skins?

I think it’s more hinting at PvP since it’s always a red team vs a blue team, and balance is a subject of this patch.
I think those skins already exist.. at least, they both look very familiar

I still have my unlimited coin

Why releasing SAB on a different day than patch?!