GW2 is adding a glyph system to the current gathering tools with this update. 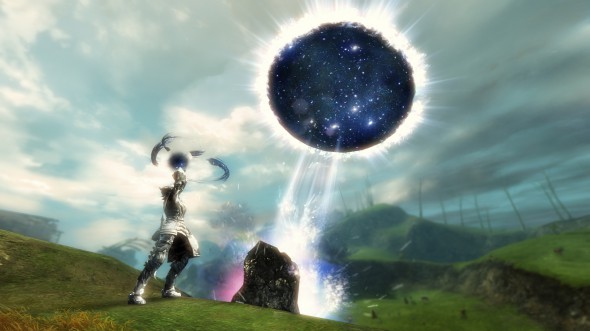 Today we’re making some quality-of-life changes to the unlimited gathering tools you can buy from the Gem Store, and we’re expanding the variety of limited-use tools with bonus effects available in the game. Read on to find out how to get the most out of every swing.

That’s right—we’re adding gathering tool skins to the wardrobe! You can change their appearance with transmutation charges the same way you do your armor, weapons, and backpacks: open the Wardrobe in your Hero panel, click on an equipped tool, and select a skin you’ve unlocked. The preview will display each tool’s on-use effect.

You can use gathering tool skins across your entire account, and they can be applied to limited-use tools as well as unlimited tools. 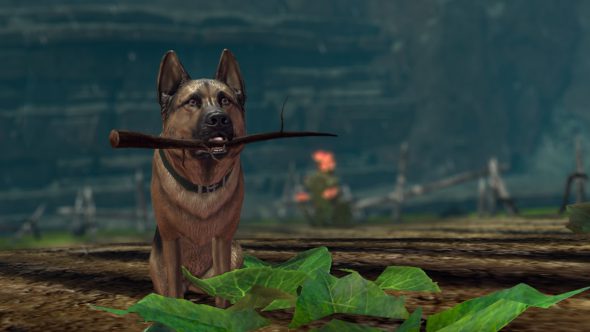 Previously, an eclectic selection of tools had a chance to return a small amount of extra materials while gathering: Unbound Magic Gathering Tools (both vendor purchased and unlimited), Frostbitten tools rewarded during Wintersday, the Lucky Dog Harvesting Tool, and the Watchwork Mining Pick.

We intended this to be a nice little bonus, but instead it felt incomplete and arbitrary. We wanted to organize the system to make it clear where bonus effects come from and how players can get them, both through the Gem Store and in the game.

Now you can customize your gathering tools with glyphs, a new type of upgrade component. If you want your Lucky Dog Harvesting Tool to fetch scraps of leather instead of trophies, swap its Glyph of the Scavenger for a Glyph of the Leatherworker.

Most tools in the game will now have an upgrade slot, and you can swap glyphs in and out freely without using an upgrade extractor. Glyphs applied to limited-use tools will go back into your inventory after you consume the final gathering charge.

For a limited time, you can visit the Gem Store and pick up a free Black Lion Glyph Selection Container. Use this item to choose one of the following account-bound glyphs*:

Each of these glyphs is also available as a rare drop from Black Lion Chests. Glyphs found in chests are account-bound on use and can be bought and sold through the trading post.

If you already own these tools, visit a Black Lion Exchange Specialist in any major city or lounge to trade them for an updated version at no cost.

Bonus Effects and Where to Find Them 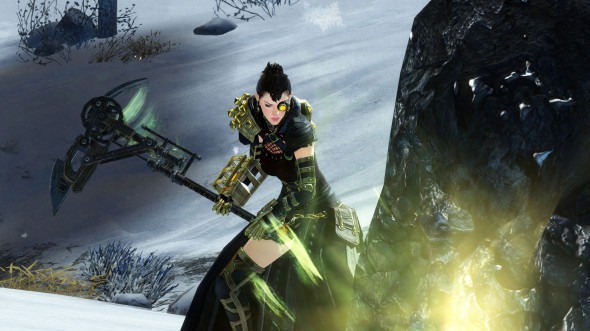 Limited-use tools with inherent bonus effects are the only tools exempt from glyph swapping, and their effects can’t be removed or changed.

We plan to add more glyphs with future unlimited gathering tools. New bonus effects will be exclusive to the unlimited tool they’re introduced with for a period of time, after which we’ll add them to tradeable Black Lion Chest glyphs and limited-use tools from gathering merchants.

We hope your logging, mining, and harvesting will be a little more bountiful in the future. Happy gathering!

Excellent! I can now be a bit more organised as regards harvesting.

The Lucky Dog tool, by the way, is well worth it – I even get a couple of T6 items each week on average, although most are T1, 2 and 3. I hope this continues with the Glyph.

One downside – it may reduce my income from selling Watchwork Sprockets 🙁

Sure, I mean there’s something aesthetic for tool gathering skins, but I would have preferred a QoL change in which you can use the unlimited gathering tools across all accounts without having to put them in bank, switch characters, and equip them again. Why would I want to put a skin over an Orichalcum mining pick or logging axe? Just purely for cosmetic purposes on a limited-use item? The Glyph system is kind of interesting, but the skin system seems pointless. Just take your permanent gathering tool and put it on instead of wasting transmutation charges.

Use the character shared slots to keep your tools, when you finish using them put them back there, it’s annoying but less so then going to your back every time.

If those unlimited tools could be bought once to use on all of the account characters simultaneously i would have bought ’em long ago even for a heavier price. But to buy a set for the price they ask for ONE character, even while having shared slots for swapping – in my eyes it’s worthless bullshit.

Yes, yes, yes! THIS is exactly what I wanted, and had asked for, so I was super psyched thinking they had finally implemented it. Then I’ve read the changes and was… Well, a little disappointed ^^’

So it says you can freely swap out glyphs, and you get glyphs back if you use them on limited-use tools… But if you put a glyph on a tool that already has one, do you lose the one already in the tool or does that pop back into your inventory?

since you can take out the glyphs anytime you want, it would be stupid, if they would be destroyed, when you try to “overwrite” the glyph,right?

Stupid? Perhaps. But I’d still like to know if it’s possible to end up destroying a glyph because you forgot you could remove the current one (or forgot there was already one) on the tool before trying to put another glyph in. I mean, that’s how glyphs on most items currently work, so it’s not farfetched to consider a player doing just that.

You can’t place a glyph if the tool has no available slot. The game doesn’t allow you to do so, when you double-click a glyph to equip it, it only shows empty tools.

On the hypotetical situation that you just place a glyph over another glyph already equipped, the way gathering glyphs are intended right now, it would just switch the glyph, sending the previous one to your inv.

Do the Unbreakable Gathering Set tools all come with empty slots?

Yeah, all have glyph slot, and the ones woth extra properties (i.e. mechanical mining) can be extracted to replace with any other glyph.

Once again ANet changes a system for the better, but not in the way that would be useful for me. I’ve been hoping for years that they’d add the ability to spawn extra copies of the infinite tools, instead of just using them on my main.

I bought the very first version of each type when they first started coming out, and the fancy animation is completely superfluous for me- the unbreakable property is all I cared about.

Glad to see the bonus properties are going to become a little more accessible, though.

Reread the dev blog. No need to “spawn” extra copies of infinite use tools. You actually add them to your account wardrobe like armor and weapons skins, which unlocks it for your account. Just use a transmutation charge on an alt for a special gathering tool skin you have added to your wardrobe like any armor or weapon skins.

What I suggest is to have 3 empty shared inventory spaces and it will be easier to have access to all tools on different character. Make sure you have an actual set of tool and just equip by double clicking in the 3 slots with the tools you have.

I got 2 Glyphs: tailor & leather. Crappy outputs, getting nothing but Thick Leather Squares and Silk which are already very cheap atm.

I got the leather glyph too, and it outputs tier leather depending on the tier of wood you’re harvesting from.

Well, my old bone pick doesn’t have a glyph slot :/

Take it to a Black Lion Weapons Specialist (unequip it first) and you can exchange it for a newer one there. It’s probably one of the old soulbound ones, and they can’t handle glyphs. I’ve had to change a few over so far.

what if it’s not in the list? I have a soulbound Molten Alliance pick, Chop-it-all axe and Consortium sickle and there’s no place to exchange them.

Not a problem I’ve had, so I can’t answer directly, but I think I recall someone on the forum having the same thing and just going to another merchant. https://wiki.guildwars2.com/wiki/Molten_Alliance_Mining_Pick has locations for them.

Hmm……still need to transfer infinite use tools, and glyphs, between characters because you have to have a tool equipped before you can transmute it. The only use this has for me is to add a glyph to an infinite use tool that didn’t have a special bonus. Other then that, nothing else really changed for me.

And it looks like they didn’t glyph the “no frills unlimited versions” SO……no fix.

Did anyone find a karma vendor for the limited gathering tools? I know you can get some from newer maps, but it talks about in towns and being the same as the bl ones.

There’s one in divinity’s reach royal terrace – up near the leatherworker’s station.

Thanks for that. But it actually below the tailor there. At least for me it was. And I saw an icon on the map now, that looks like a gathering tool.

Huh, I’ve got a guild master below the tailor. Go figure.

They are selling the boring unlimited tools now. If I add a glyph will it work with them? Before I waste gems on them?

Yes. And I actually asked anet to make boring ones because the flashy are bit too flashy for my taste 😉

A fairer system. Though I feel previous exorbitant purchases have just shot down in value :/

Did anyone even ask for this…?

No but there has been extensive complaints for years over how unfair it is that some gem mining picks give extra rewards while others don’t – even though they were usually more expensive.

The Infinite Unbound Magic Gathering Tools were an obnoxiously expensive set to buy (in the pre-mount era anyway) but had the near unmatchable bonus of rewarding unbound magic on every strike. The fact that people could pay exorbitant amounts for a pay-to-win bonus (unless you acknowledge the fact that you’d need to spend over 5 years constantly farming to make back the gold loss) seemed to upset lots of people for some reason.

It was an easy implemented fix which has normalized a system for the odd choice of spurning the people who actually payed in money to buy the previously OP gathering tools. The only blemish now left on GW2’s financing side is the original rng mount box (with no non-rng purchase options) and the fact that making trash tier mount skins rng-gem fodder has deprived each new release of a meaningful farm reward.