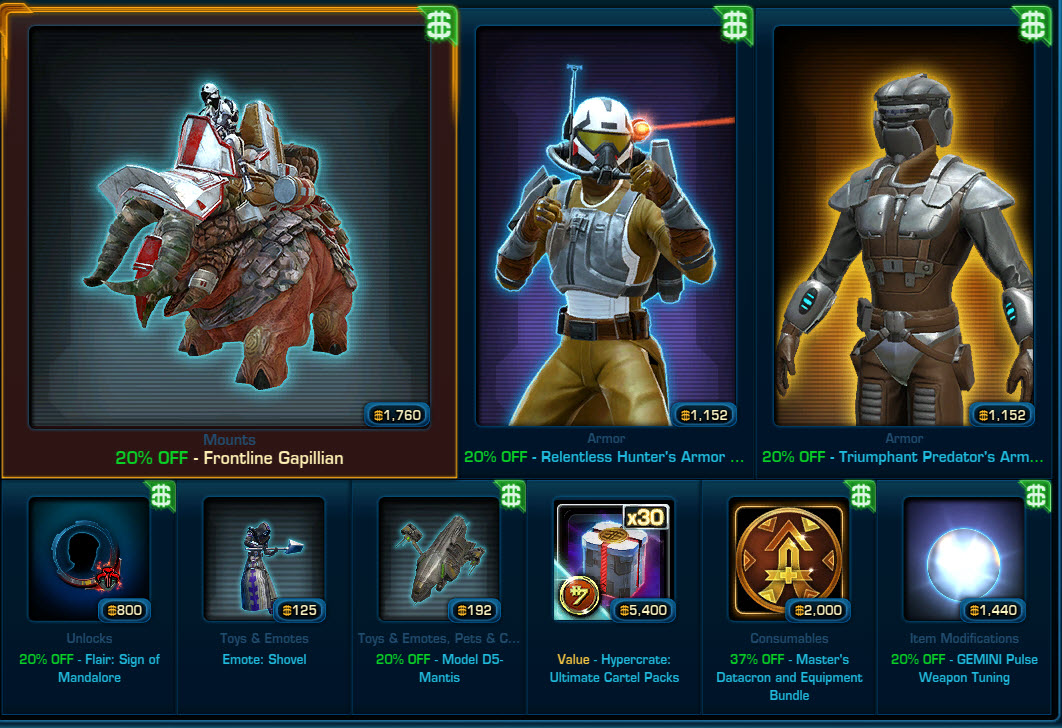 And the estate sale continues…

Nope….Guess I’ll wait to see if they have anything that’s actually worth something next week…

You will die from waiting before they do what you want them to do, no matter if it’s the market or anything else with the game.

Seriously? Is this game’s continued existence hurting you that much!?

I believe he’s hoping that it’ll die and that a new Star Wars MMO title will take its place.

When this closes, that’s makes two failed Star Wars MMO’s. There won’t be a third.

Agreed, with that rack record EA or whoever are hardly likely to sink millions into another Star Wars MMO.

When I see proof that there are plans for a new SW MMO I’ll rejoice in the hope of turning a lighsaber on (and off, of course) again.

Until then, this is what people have. I don’t think there will be another one in the near future.

And no, I don’t wish for this one to die. There are still people that obviously enjoy playing it. Let them. If the game shuts down, the only assurance we have is that ALL of us, those who play and those that don’t would be out of a game.

I sincerely see nothing positive about that.

Yeah, but in the immortal words of Mark Twain (well, not EXACTLY, but you get the picture):

The reports of EA’s death have been greatly exaggerated.

They are still making a TON of money each year. Yes, “Battlefront 2” was a bit of a setback.

But in truth I don’t think EA will be “out of the way” anytime soon.

Until Disney sells Star Wars to someone who doesn’t suck there won’t be a good Star Wars movie or mmo.

That’ll be two failed SW games in a row, which would not be encouraging for anyone wanting to make a new one…

People don’t seem to understand that there is no inherent flaw in the MMORPG genre if you have a niche, a plan, and the know-how to make it happen. It’s a struggling genre because too many developers either use it as an avenue for milking players through microtransactions, or crank out sloppy, unfinished and unpolished work with zero regard for minding the failures and successes of those who have gone before.

It’s the arrogant mentality that they know better than the players about what the players want.

A Star Wars MMORPG is hugely promising despite the failures of SWG and SWTOR. In fact, the proof already exists in how tenacious SWTOR’s playerbase has been through the shameful distribution of content- if this many people are willing to stick around purely because it’s Star Wars, regardless of how awful the game currently is, I’d be curious to know what a Star Wars MMORPG done properly could be.

Any new game put out won’t be Star Wars but will be subject to the makers of High School Musical and as such will be as big a piece of shit as the new movies put out under this once great moniker. They may well put out a Disney Wars MMO but I know that a great many real SW EU fans including myself won’t even look at it. I think they’re aware that the average fan of their movies are casual movie goers and they won’t have the draw of cult following in their games that this game enjoyed so they likely won’t bother.

Dude, I feel that strongly about a lot of things but you know what? I don’t go on their chat sites because I’m not a masochistic moron. If I were I suppose I’d spend lots of time on those sites and curse them too.

i do want that flare

For the first time since 1.0, I’ve lost interest in swtor. I was a diehard. No question. But finally … sick of re-doing HM/NIM. Sick of the events. The stories done multiple times. Listening to the nasty BS spewed by 12yos on fleet, looking at skanky old men (and fat women with a fantasy) driving slutty fem toons with that big hairspray housewife hair and everyone who draws attention to their parse in raids instead of just knowing that good numbers and a rep speak for themselves. Hope the new folks playing the game enjoy the initial class stories (cept consular… cause no one likes that) … and SOR … and Ziost … and perhaps take a force user through kofte and kotet once for the simple experience … cause I am finally (my family applauds) done.

I like the Consular story. Trooper though, not so much…. I am surprised you lost interest in SWTOR just NOW. I do not know of a single person who has never gotten bored with this game. It has been really bad in the past, and is bad right now too.

i REALLY like pretending to be a sith lord……hilarious!

I played the trooper story as a renegade Shepard, more DS options but not all the time, which actually made it really enjoyable. Also liked all the companions even they didn’t always see eye to eye with my decisions.
The consular tho, average story which was made even worse by having 5 of the blandest companions in the entire game tagging along.

I got bored and quit a while back only to start playing again after a few months. I didn’t return because of the amazing gameplay or any additional content, I returned because I’m a Star Wars addict and this is the only real SW left aside from old novels and movies which I’ve already read and seen. I actually even sub again, not because EA earned my money or thatbid probably miss out on all that much if I dropped it but because it’s $15 a month which is nothing. I’ll get bored and quit again soon but new content along the lines of SOR would acually keep me around for a while.

I really don’t know how long do we have to wait for KOTOR3.

I seriously doubt it will ever happen…

1. Probably not, they are concentrating on a potential Solo/Lando series now.

2. With the direction KK is taking Social Justice Wars, I’m not sure if I want to see the beloved Old Republic material defiled. It’s best they leave it alone.

Already happened. There were at least three references in The Last Jedi that I can remember off the top of my head.

That said, I don’t think there is every going to be a KotoR 3 (or 4 if you count ToR as 3). Can we really envision a scenario where Disney wants to work with Bioware again?

I believe it was already released under the title “Star Wars The Old Republic”.

When this closes, that’s makes two failed Star Wars MMO’s. There won’t be a third.

SWG didn’t fail, it was forced to close to make way for swtor. Still had a healthy population when it closed.

Do you have to come out to us every time there’s a CM update?

I’m guessing this is as close to coming out of the closet he can get.