A guide to the new NPC Dating System in Black Desert Online.

NPC dating is a new mini game added to Black Desert Online available to select NPCs. The idea is that you give gifts to a NPC (anything that can be sold on the marketplace under 50 million) and then gain amity with them until you reach 1000 amity with them. Once you reach that threshold,. you can confess your love to them. However, whether or not you will get accepted depends on your amity with that NPC vs the amity of other players with the same NPC. The higher your amity is, the better chance of your proposal being accepted. You will find out after the maintenance and the “love” lasts only a week unless you maintain the highest amity again next week. 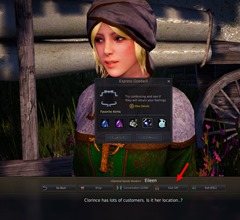 The only benefit of the whole dating system is the weekly and permanent titles you can get.

Here are the NPCs you can date sorted by city with their favourite items listed. You can date NPCs of the same gender.

Each gift you give to a NPC will consume 5 energy. When amity of the NPC reaches 1,000, the option to “Confess” your feelings will become available.

After you confess, the NPC will need some time to think. You will receive an answer via an in-game mail (B) after the next maintenance.If the NPC accepts your confession, you will become their lover and earn a special in-game title with a distinct color. However, your Amity with them will decrease by 10%. If you are rejected, you will get nothing back and Amity will decrease by 5%.

Whether you succeed or not is calculated based on the ratio “How much Amity you have with that NPC”/”The total Amity of all the adventurers who confessed to that NPC the same week.” The higher your Amity is with the NPC, the better your chances.

If accepted, your relationship and temporary title only lasts for a week and the NPC may choose another player once the week is over if their amity is higher. You can maintain the relationship by having the highest amity relative to other players for that week.

Keep in mind that you cannot confess to a new NPC while you are in still in a relationship.

Dude What the fuck ?

I’m curious if there are gender restrictions on the npc interactions. If not, I’m actually surprised they added this in game.

It clearly states on the article that you can date same gender NPC.

Is this feature also aviable in the Xbox One Version?

you can date crio WTF BDO