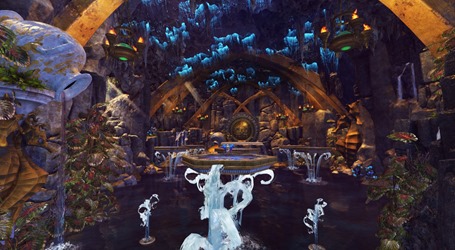 Nikare and Kenut are a pair of Largos assassins each with their own unique special skills. This fight will initially have you face off against Nikare and Kenut as a raid team and then split off into two sub groups to finish them off.

Condi classes and especially Mirage is heavily favored for this fight as Confusion and Torment deals a ton of damage to the bosses. Boonstrip and fast CC are necessary as well. This fight features DPS check at every phase of the fight and failing it causes an automatic wipe. Tanking is toughness based. Split your squad into two even teams, each with a tank and healer. Nikare does have more HP than Kenut so for the Nikare team you may want to have a tad more DPS for an even kill.

Dodge the bubble circles on Nikare, drop tidal pools on the edge of the platform. Avoid the geyser knockback and rushes. For Kenut dodge/jump the water waves, avoid the aquatic vortexes, and have someone furthest away kite her. Split into two subgroups for the post 50% of the fight on the third and fourth platforms. 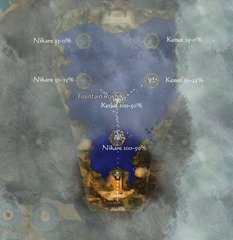 Nikare is the first of the two Largos you have to face. You have exactly 2 minutes to bring him to 50%.

Small AoE circles will appear under each player’s feet. When they fill up after 2 seconds, anyone standing in one will be floated for 4 seconds in a bubble and unable to use any skills (except for stun breakers). While you are inside the bubble, you will take ticking damage which isn’t very severe (~5k per tick). You can dodge/invul/evade the circles or stun break out of the bubbles. On challenge mote you will have to be especially careful to not get trapped in these bubbles as they can get you killed when you need to glide off the platforms if you don’t have a stunbreaker handy. 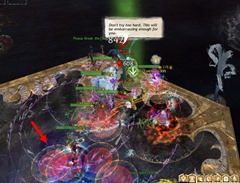 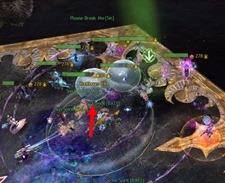 Every 13 seconds, one player (excluding the tank) will be given a shrinking double AoE circle undernearth their feet along with a red text warming message and a yellow screen border. When this happens, this player need to move away from rest of the raid and stand on the edge of the platform to drop off their Tidal Pool (you have 5s to do so).This Tidal Pool deals ticking damage to anyone standing inside it and applies a stacking debuff every second called Waterlogged. Anyone with 10 stacks of this Waterlogged debuff will instantly be killed. The Tidal Pool will grow continuously before despawning after 85-90 seconds 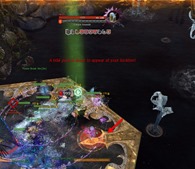 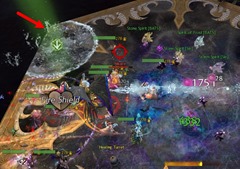 Each stack of the Waterlogged debuff also increases your damage taken from Nikare’s Aquatic Aura, which is an unavoidable pulsating damage.The Waterloggeed debuff does wear off after a few seconds as long you don’t accumulate new stacks.

Geyser is a knockback AoE attack telegraphed by two large AoE circles. The circles will be placed under two random players and can sometimes overlap if they are closer together. Anyone who do not block/dodge/evade the Geyser will receive a fair amount of damage and be knocked back quite a distance, which can be problematic if you get knocked off the platform. 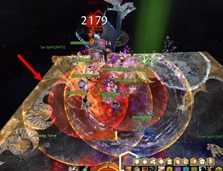 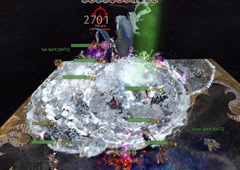 Vapor Rush is a chain of 3 attacks where Nikare will rush towards the furthest player away from him and then rushes back towards the tank. Each rush deals significant amount of damage so it is best to dodge/block/evade her if you see that attack coming as taking 2 rushes in a row can down you easily when combined with other damage sources.

Kenut is the second of the Largos twins. Much like Nikare, you have 2 minutes to get her to 50%. She has different skills from Nikare but the same Waterlogged debuff also applies to some of her attacks.

Aquatic Vortex is an environmental hazard that occurs on Kenut’s platform. Three vortexes will roam around the platform. Players caught in them will take continuous damage and receive the Waterlogged debuff every second. They tend to move as a group and leave a good portion of the platform safe so it is usually easy to avoid them. It is advised to thus tank around the middle and/or follow the safe space behind their rotation. You can dodge/evade/block through them. 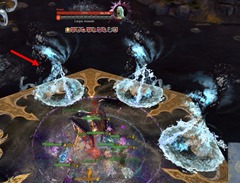 Kenut also has the pulsating Aquatic Aura attack so the more stacks of Waterlogged debuff you have, the more damage you take from her.

Periodically Kenut will stealth out from the fight and teleport to the furthest player from her and launches a very rapid telegraphed rectangular AoE attack. This rectangular AoE will steal all boons from players caught in it. You can have a designated player (i.e. healer) that stay far from Kenut and just kite the boss when she teleports. In the event she does land her attack, you will want to have a Mirage bring boonstrips (i.e. Phantasmal Disenchanter) to rip off the boons quickly. 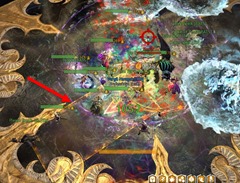 Sea Swell is a tidal wave attack with a telegraph that occur 1s before the attack lands, giving you a chance to dodge/evade/block/jump over the waves and avoid the damage. You will also see a similar attack on Qadim so it is a good idea to familiarize yourself with it. Kenut will wind up the attack by quickly sending out a golden ring across the platform, after a second she will produce a tidal wave from her location that sweeps out in a ring and knocks players down. For every player hit by this attack she will gain 3s of Protection. 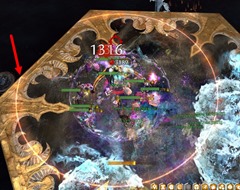 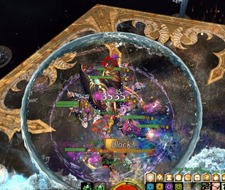 Cyclone Burst is a mechanic similar to Falling Debris attack from Amalgamate. Kenut will send out 3 circle AoEs radially from her position in a cone shape made up of small, medium, and large circles that explode one after another in three directions. It is easy to sidestep into the safe spaces between each of the three cones. When the largest AoE ticks, she will send out a second wave of the exact attack, but this time the AoEs will rotate by 60 degrees and the previous safe space will now be covered in the AoE. Simply sidestep back into the new safe space. This attack is also avoidable via block/evade/invul etc. 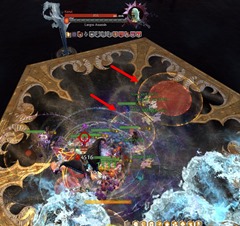 Once you pushed Kenut to 50%, she will go invul and the third phase of the fight will begin. At this point the raid will split into two sub-squads, each going to a different platform (left or right) to face individually against either Nikare (left) or Kenut (right). Make sure each sub squad has a healer and tank with appropriate DPS allocation.

You will have 2 minutes as a group of 5 to push Nikare and Kenut to 25% individually or the entire raid wipes.Mechanics are identical to the previous phases with the exception of a new CC bar mechanic with roughly 1:35-1:40 and 0:35-0:40 left on the timer

Nikare/Kenut will teleport to the middle of the platform and starts spinning to perform the Aquatic Barrage attack until their breakbar is broken. Fast CC is necessary to minimize the damage. 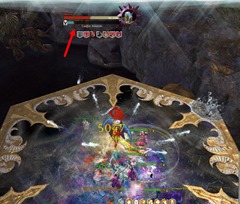 Once your individual boss has reached 25%, you can glide to the fourth platform and finish off the fight. Mechanics are identical to the third platform with the same 2 minute timer except for the addition of a new stacking debuff that occurs every 3 seconds while you are on the platform. For every stack of the debuff you have, your respective boss will deal 2% more damage to you with their attacks. 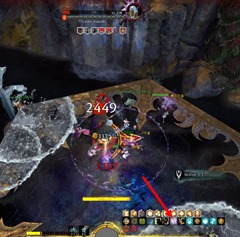 When both teams make it to the fourth platform, a large set of water spouts will spawn between the 2 platforms. These water spouts will propel you to the other team’s boss platform. Utilize these spouts if one team has lost players or when one boss dies everyone can travel to the other platform and kill the second boss.  For slow groups it may also be advantageous to swap out players to the other side in order to essentially reset their debuff stacks, as the second boss’s damage to you will not be affected by your first debuff stacks.

Note that if you kill one boss before the other, the remaining boss will be enraged and deals 200% more damage so it is recommended to keep their HP similar. Remember that Nikare has more HP so sort out your DPS according.

Challenge Mote on Nikare and Kenut is identical in mechanics except for the additional of a new mechanic. At exactly every 20% reduction in HP, Nikare/Kenut will have a mechanic similar to Gorseval’s World Eater where you must get off the platform and use the water sprout to get back on it so you are not on the platform when it explodes. Otherwise it will instantly kill you with no downed state.This can be especially deadly when combined with the Aquatic Detainment or when you get downed right before this mechanic goes off. Nikare/Kenut will teleport to the middle of the platform and a bright orange circle will expand from the center. Once this AoE reaches the edges, the entire platform will explode. 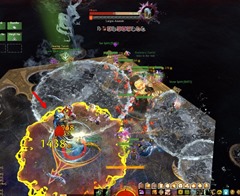 This mechanic will lower your DPS quite a bit but Mirage phantasms and clones will keep DPSing during this so they are another reason to have on this fight.

Special thanks to sK for the raid carry and Rubik for writing the initial draft.

Players interested in getting started in raiding may check out the GW2 Raid Academy Discord [US] (not affiliated).