GW2 2018 Halloween Festival guide with a list of the new items and achievements.[toc] 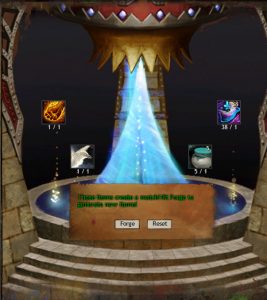 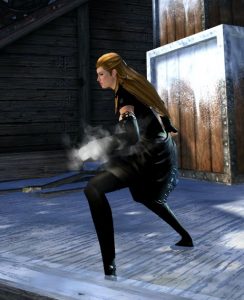 You can find the guide to past year’s achievements here: http://dulfy.net/2017/10/17/gw2-halloween-2017-festival-guide/#Achievements 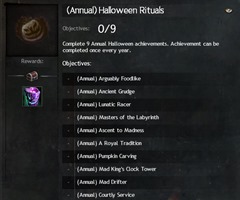 The entrance to these activities can all be found in Lion’s Arch. They are marked on the map as door. The exception is Mad King Says which occurs in Grand Piazza instead. Be sure to check out the vendors as well marked on the map with a candy corn icon. 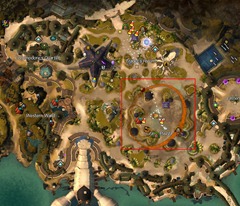 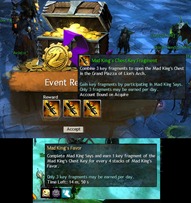 Haha, even here I can find no love for Mad Drifter achievement :p

A different skinned version of the Touch of Madness torch. Looks like at this time the 4th item needed hasn’t been figured out yet.

Tub of Wood Glue from your Guild Hall from the commendations trader in the market.

The last ingrediant is the tube of wood glue you get from your guild hall for guild commendations. Hope that helps. 🙂

Glad it’s not just me that finds the beetle race course annoyingly small and cramped.

Would have to beat the tower 3 times too. 😐

They made the annual one 1:30 to my knowledge, it just doesn’t say that in the text. I got this by doing under 1:30 three times.

I don’t know how I got it then because I can’t ride that roller beetle for the life of me and I got the Mad Drifter achievement for the Annual after three races.
The Time Trial showed me at 1:27ish.

Please note that this was for the race, not the Time Trial.

They definitely changed it to 1:30, it is in the patch notes

alekzan I do not agree

Happily, today’s patch relaxed the time requirements for the Raceway achieves to 1:30, which you can achieve quite easily on a Raptor with the Canyon Jump and Endurance mastery. 🙂

I finished Mad Drifter before the nerf so I’m a little salty now. But yeah, that thing was pure cancer. Beetle is just a horrible mount.

its fine as long as your going straight LOL

Well get good instead of whining beetle and that race !
it’s actually very fun to grind when you know what to do… but ofc when you suck at it and don’t want to understand how to control it..

Beetle is an amazing mount, its the race track that is cancer. There are just far too many obstacles to use a beetle effectively. I would kind of understand if the gravestones and hay stacks were destructible and would simply slow you down, but coming to a dead stop because you hit some immovable blades of grass is just not fun in any way.

Thanks Dulfy, always the best place to find info on events. It’s hard to believe I’ve been visiting this site for over 6 years.

can u open the Ascent to Madness end chest many times?, i did 3 dungeons and just open the first

The big chest at the end (which is where the Bat Wings drop from) can only be opened once a day. However, you do get 5 Personalized ToTs + a choice of other items per completion of the dungeon (although I believe this is hit by diminishing returns after a while) so it does make a decent bag farm with a speedy group.

I did Mad Drifter perfectly fine on the fourth or fifth try… On a jackal.

They made Mad Drifter a lot easier now. Only need to get the race done within 1:30. Got it on my first try with a raptor.

Hey Dulfy, any idea on the mad spirit cat at the center of the lab by the vendor guys? It keeps telling me that is it not hungry right now. Just wondering if anyone has figured it out yet. Thanks a million for all your hard work as well as your team!

Maybe we have to feed it candy corn or something..

I’m kind of disappointed that it seems like you can only get the bare minimum done on foot, especially being it is safe to assume there is a large volume of free to players now-a-days since they made gw2 free way back when.
Dulfy, or others, do you have any tips n tricks for people only with the base game? If it is what it is, I understand, but knowing the guild wars franchise for so long, there just has to be some way y’know? lol

Rent a mount. You can do this by the people that say Mount Rental or whatever they are
labeled. 1 in both areas.