A guide to the new SWTOR guild perks and guild levels being introduced for patch 5.10.

The first thing to note is the newly redesigned guild window. It has four tabs: general, roster, perks, and ranks.

General tab give you a good overview of guild activity and conquest leaderboard for guild members. 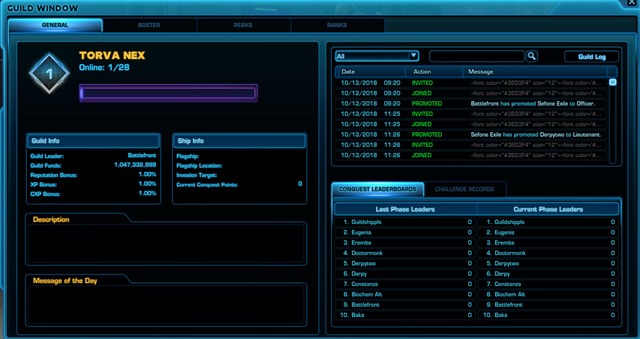 Roster have not changed much from the older version. Pretty much identical 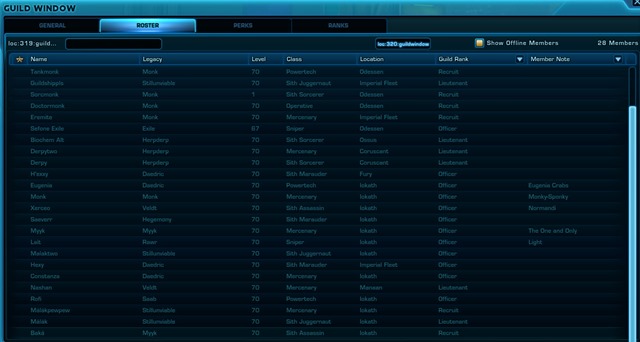 Perks is completely new in 5.10 and will be expanded on below. Note that to use guild perks you must own a Guild Flagship and unlock the various rooms in the ships. Guild flagships have their prices lowered from 50 mil down to 15 mil. 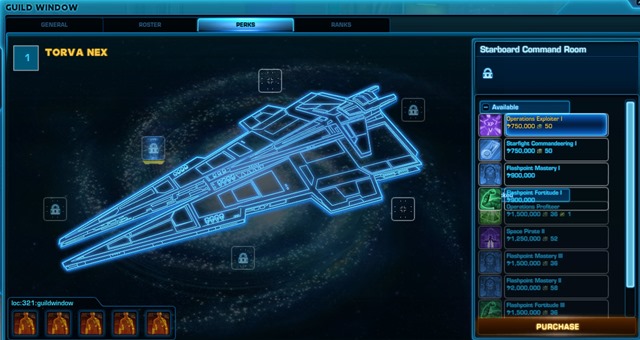 You can now set custom ranks and give specific permissions for each rank you set. 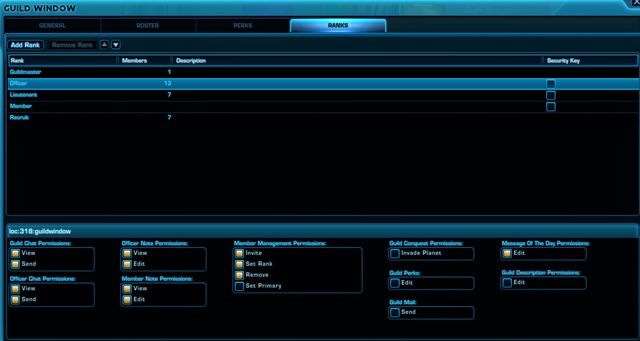 Guilds can now earn levels. Guild levels are earned via conquest points with every conquest point = 2 guild XP. There is a weekly cap of 8 million guild XP (4 million conquest guilds) that only very large guilds will reach. It is expected that guilds that are hitting the Small Yield Planetary targets will be gaining ~ 3 levels per week.

There is no cap to guild levels but hitting above level 65 will not unlock additional benefits other than Guild Commendations. As a guild gain levels, they will also earn XP, Reputation and CXP bonus up to a max of 15% for XP/Reputation and 10% for CXP.

To use guild perks you must own a guild flagship. Flagship costs have been reduced in 5.10 from 50 mil to 15 mil. Perks are part of “nodes” on flagships, which are unlocked as you unlock additional rooms on the flagship. Each node will have a selection of perks available for purchase. Bridge nodes are unlocked automatically by default.

There are three types of currency used to purchase guild perks

Guild Commendations are earned in two ways: when the guild gains a new level (5-10 per level) and when your guild reaches an Invasion Yield target

Reinforcement Modules are acquired by combining 10 Reinforcement Components. These components are BoP and acquired in various ways

There are two types of perks: Core and Cycling. Core is always available and typically only cost credits. Cycling guild perks are only present for a few weeks and are typically more powerful with more purchase requirements.

Perks belong to one of five set bonuses. This adds another layer of choice as you can either pick the best perks or pick perks that fit into a set bonus

Keep in mind that perks with the same name cannot be used together (i.e. Gathering Efficiency I and II does not stack)

How any ranks I can set ? I though there will be some info about heraldry (emblems , banners or somthing)

I think they said that would not be in 5.10 but maybe a future update.

1. Spoilers for people who haven’t read the datamined dialogue.
2. Not exactly relevant.
3. Why would you spoil it for some people?

Why not ? People can chose. It’s not like the Emperor is here to say you are Bad, then lights his saber up 😛

Just saying, since there’s literally a spoiler in the video title.

You are right. People can choose… Why not you ask? For me the reason would be, because I choose not to be an asshole.

Obviously, your choice was a bit different.

Interesting… I get something from you tube to post. Were anyone one can see it that does a search on SWTOR. You feel my posting was an A..hole move ok. Since it was already posted I did not. But will concede I should of put Spoiler Alert. Have a fun day 🙂

your a bit of a prick tbh for linking this even if people did nt want to know the youtube title say about his return . u like posting youtubes in most of dulfy posts

Like the saying goes to each their own right or wrong

LOL everything in this game is a massive credit sink and/or over engineered to the billionth degree for no good reason. Look at the guild perks in Destiny 2. How much glimmer and made up currencies do they require? Oh yeah… none. Just play the game. That’s it.

More grind 😀
Temporary boost. Man why i feel so happy ditching this game long ago. I dont mind grind but this?

Wait, did they take away the passive guild xp bonus and re package it into a grind? If so, fuck that

I imagine there are a lot of guilds out there that would never see the full 10% the way things are now. This lets the smaller guilds have the max% (eventually) without having to whore themselves out to strangers to build up membership, while letting the big guilds regain their full max% in a few weeks and never have to worry about losing it if the membership dwindles. Plus, the max goes up from 10% to 15%

That is exactly what they did, yes.

Unlocking rooms on the flagship costs the same, and the cost to buy encryptions is going to go through the roof thanks to the patch today, so that 42 million is meaningless.