Bioware has published a blog post outlining the rewards for Season 10 Ranked PvP.

Greetings PvPers! Season 10 of Ranked PvP is set to end with the launch of Game Update 5.10.1. Just as a reminder, after Season 10 ends all Season 9 tokens will be converted into credits. This will be your last chance to redeem these tokens, don’t miss out! 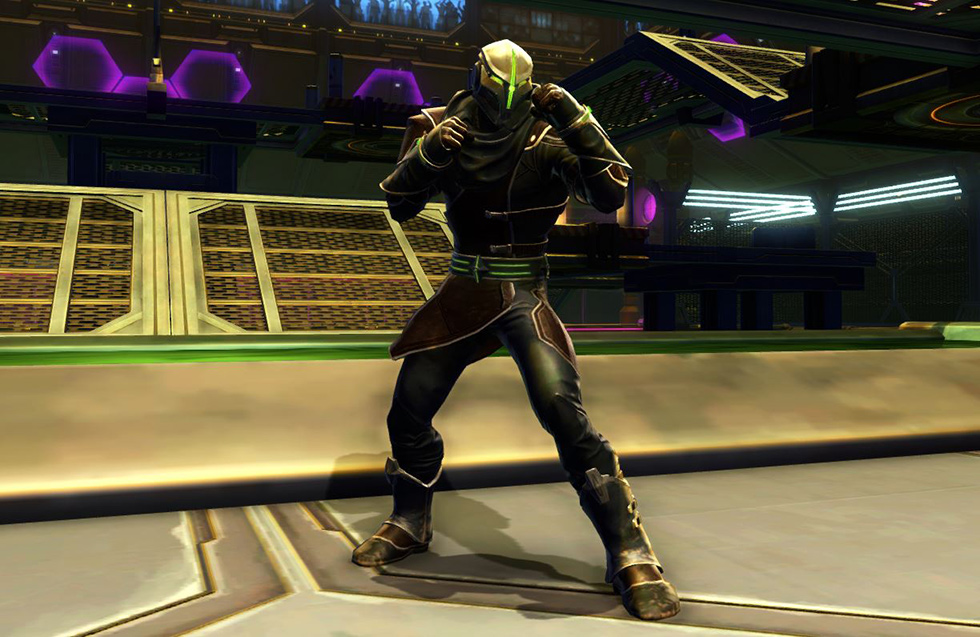 Season 10 marks the first time that cross-faction play has been a part of Ranked PvP. With more competition comes a couple of changes to how we breakdown rating tiers. First, each tier now has different rating requirements for Solo and Group play. This is due to overall rating differences between these gameplay types. Second, rating requirements across the board have lower requirements so be sure to double check where your characters fall!

Another change you will notice is that the number of Ranked Tokens earned in each tier has been lowered. This is because starting with the end of Season 10, Ranked tokens are no longer season specific, don’t expire across seasons, and can be used to purchase any available rewards! Season 10’s unique item, the Resourceful Renegade Armor Set also has a lower price than other Seasonal rewards (50,000 tokens) to match the reduced Token rewards. This will however be raised once Season 11 ends. Onto the tier and reward breakdown!

One thing we have always received a lot of requests for is players to be able to acquire old Seasonal rewards that are no longer in the game. Starting with the end of Season 10 we will begin bringing back old rewards, starting with Season 1! This only includes the items that were purchasable (listed below), items such as titles that were earned by rank are not returning.

Given the exclusive nature of these rewards however, we want to be sensitive to those players who earned them back in Season 1. Returning items are clearly marked as Replica, to be distinguishable from the originals. Although prices are not locked down just yet, these returning items are going to be priced at a premium. It is intended that an average player will have to play over the course of more than one season to acquire them. Lastly, any player who earned these rewards in Season 1 will receive a special Achievement to mark the accomplishment. Here are the rewards:

Replica Season 1 Ranked Armor Set (4 of them in total)

Season 11 will begin two weeks after Season 10 ends. During this two-week grace period we will be investigating any remaining player reports of cheating. In the instance of finding such cases appropriate action will be taken up to and including character ranks being reset. This will affect the leaderboards and associated rewards, especially the top 96. All tier rewards and top 96 will then be granted upon the start of Season 11.

A new vendor called Tullek the Evocii will be appearing next to Giradda the Hutt at the start of Season 11. Tullek will always be selling the prior seasonal rewards and they will not be taken away. If players are seeking the new seasonal rewards, Giradda the Hutt will have them. Players only have a few weeks left before the end of Season 10. Get in there and claim rightful glory in Giradda’s Arena of Death!

Yet all I see is cosmetics and more cosmetics. Title may be different but the content is still the same, don’t you think?

Premium prices to appease to “sensitive” players… Most of them are toxic little shits that cheated anyways. Increasing the prices for past Edwards with reduced token rewards… No thanks EaWare.

“intended that an average player will have to play over the course of more than one season to acquire them.”

I bet it is. Add more grind so those flithy casuals sub to your shitty cash grab tactics. Increase all prices as the season continues and reduce rewards, genius!

The only new armor I like have to be pvp reward…

Fuck you Bioware. Fuck. You.

But honestly it be EA first then BW

BW is just part of EA now, the best intentions in the world can’t change the fact that they control it all. The name is just there to prey on people’s fond memories of the glory days.

Well I missed ranked this season due to being unsubscribed. I can’t deal with all the win-trading and dumb ass elitist turds and they pocket heals. Maybe next season (or never)….

yup and I can tell you its still rampant as is the cheating..and its fn obvious not “learn to play” bull…BW needs to bring in permabans

They do. Some of the crap is filtering over into unranked as well. It’s a huge waste of time.

Positive parts of this post: Cross-faction PVP is going to be possible. [ Would be nice if that carried into the (coming eventually, maybe?) next expansion for PVE… for those who chose to ally with the opposing faction, at least. ] You can get old season rewards. Negative parts: Everything else. The “new” armor looks like it was designed as part of the KOTFE launch and was just left over. I’m fairly certain I’ve seen at least some of those pieces, even if they might have been textured differently. Seriously. This set? Weak-assed-weak compared to the stuff they are offering for sale on the CM the last few months. No real details. MEDIOCRE! Add that on top of the other observations about reduced rewards and increased prices on old seasonal rewards… and it’s pretty clear that they don’t even really understand how to get the most mileage out of content that they already have on hand. Very disappointing. And, of course, none of this stuff is even remotely satisfying as a hold-over while we wait for an actual expansion. I was a CE founder who had stayed subbed until a while after KOTET. So I’ve been pretty patient with them. Not feeling that way any longer. I had re-upped to see the “new content” that was added recently… that whole 30 minutes of new stuff. Wow. I’ve loved the game fora long time… have like 60 toons over 3 servers (40 of which are on TEH :P), but it’s played out. I can’t even find the urge to alt again, much less dig into a new grind for old rewards. Feels like TOR finally hit maintenance mode. Shame. Only question left is: Do I uninstall? Or do I have enough hope to have a look in 6 months or a year and see if they actually turn out another expansion? Certainly ain’t holdin’ my breath.

lol… you probably had the right of it!

oh look its my stalker he must have waited 7 years to post to me again he must have missed me dearly. A stalker talking about healthy behavior sigh…smh

You can always reinstall down the road. If the game last a year. Go find a game you enjoy for now

That the best you can do??? lol

Haven’t cared about PvP in this game ever since I spent dozens of games getting ganged up on by stealth Operatives with fucking stun-locking bullshit that kills you before you can blink.

Jabs, is that you?
Cheers,
C

Check out this fun clip of an interview with Gary Whitta, one of the writers of Rogue One. https://www.youtube.com/watch?v=U2E_1Uan4Ec and jump to 00:05:52.

For some reason your link doesn’t appear to work from directly clicking on it. It does work when you copy/paste however. But, to the point the guy says he would like to see “Bioware work on a Star Wars project.” He and the majority of people out there keep forgetting is that Bioware already has a Star Wars game out. And of course it is SWTOR which they were in the process of creating before EA bought them. He really needed to think that thought through. At one time it would of been true, but I’m not to sure that Bioware has it in them any more.

Good. Bioware isn’t the stamp of quality it used to be. I don’t want them touching kotor.

Hello dulfy you will play anthem?