With Game Update 5.10.2 “Heralds of Victory” we are introducing a tool for Guilds to rally behind, Guild Heraldry, and a major re-work of the Preview Window. If you missed it, be sure to check out our detailed look into the Preview Window we posted in March. Today, we’re going to take a closer look at the Guild Heraldry system.

Guild Heraldry helps Guilds by adding a route of customization to further form their own identity. Guilds can choose from a selection of Symbols and Backgrounds, along with the full hex code color spectrum, to create a personalized banner to rally behind. These Heraldries are then available to be seen both within a Guild and outside of it. Now let’s break down the individual pieces, so you know exactly what makes up a Guild’s Heraldry and where you can see them displayed throughout Star Wars™: The Old Republic™.

Symbols serve as the focal point for each Guild’s banner and they’re comprised of two different parts. Both parts can be adjusted independently of each either via a color wheel or by inputting a hex color code, allowing over 50,000 color combinations for each symbol. What type of Symbol will your Guild choose? A blaster pistol to represent your roaming Guild of Gunslingers, a ship to show off your passion for Galactic Starfighter, or maybe a mug to speak for your love of the Cantina life-style? With over 100 different Symbols to choose from, the Galaxy is the limit!

Symbols are just the beginning; the Backgrounds are what make Heraldries shine! As the name suggests, this part makes up the background of the Heraldry, and like Symbols, are each divided into two parts. Each Background can be colored independently, utilizing the color wheel or inputting a hex color code directly. The Backgrounds vary from simple canvases to detailed and even regal designs. Some even have gradients, which would be perfect to simulate a starship going through hyperspace! Now, by taking the Symbols that were in the example above and pairing them with suitable Backgrounds, you can really see the depth that the Guild Heraldry system allows. 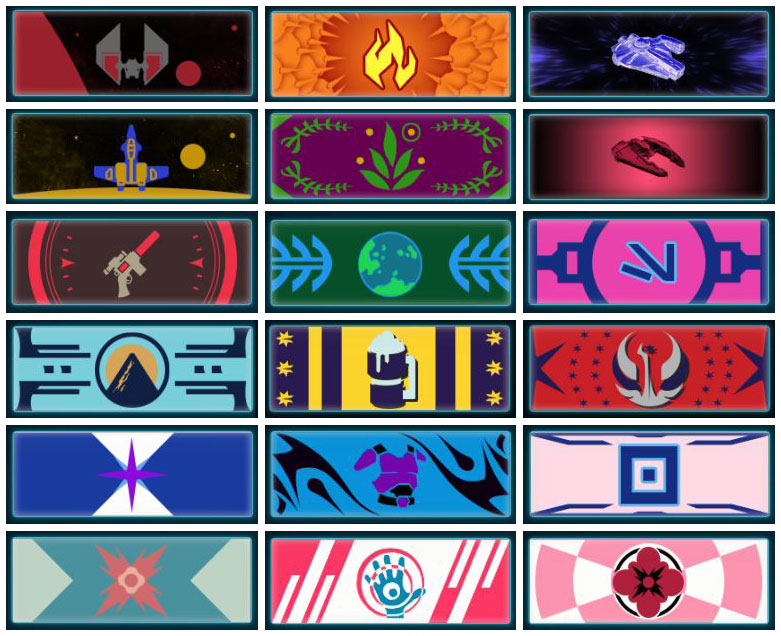 Sampling of the different Backgrounds available
Putting It All Together

The Guild Heraldry system allows for a lot of customization, while still being easy to use. Guild Leaders (or those ranks they grant Guild Heraldry editing powers to) will be able to create and edit their Heraldry with a few simple clicks. All aspects – Symbols, Background, and colors, can be changed simply by clicking on the current selection and a menu showing all the options will open up.

While working on your Guild Heraldry, you’ll see the preview of it adjusted in real time in the upper left of the menu just under the Guild Name. Both Symbols and Backgrounds have their own section in the Heraldry interface where you can adjust their two-piece color scheme. As noted above, each of these color schemes can be changed and altered independently of each other. The combination of Symbols, Backgrounds, and the color wheel leads to millions of possible combinations! 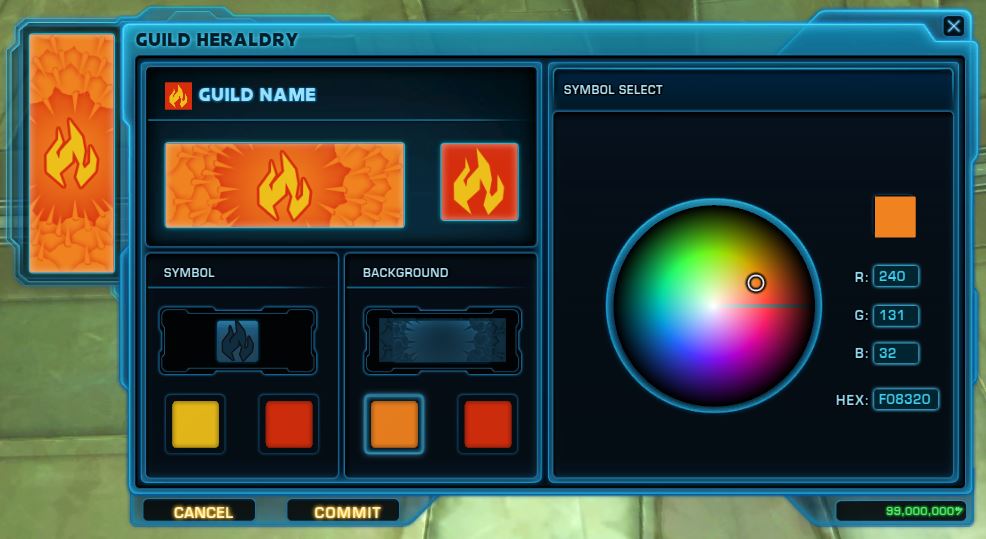 A Guild’s Heraldry will be proudly displayed within the Guild Window, on any invites to new members, and on Guild Invasions of planets. While exploring the galaxy, players will be able to see the Heraldry of other Guilds on character nameplates or via inspecting someone’s Guild.

Game Update 5.10.2 ‘Heralds of Victory’ will be going live April 11th. Gather your Guild and build your own Heraldry to rally behind. All Symbols and Backgrounds that come with the launch of Guild Heraldry are immediately available to Guilds of any size or level. Join your most trusted allies and make your mark on the galaxy!

Step 1: Work hard to destroy group content in the game and as a byproduct kill guilds as well.
Step 2: Work on content for guilds.

i don’t understand the devs for this game.

why are you just now working on something that should’ve been released when the game was launched? i mean this is probably great for the people who RP but the vast majority of the people left more than likely don’t give a shit.

In our small guild we like to play all aspects of SWTOR, like PvP, GSF, RP and PvE (except OPs).
I assume that the new guild heraldy is not only interesting for RP-only-guilds but also for many other SWTOR guilds like my own guild.
So this new feature is IMHO a good thing.

Several of the active members in my guild immediately turned the icon off. It is pretty annoying if you play with your own nametag on.

Honestly I’m surprised they’re releasing something like that. Some might say “too little, too late” and quite frankly, I would have agreed with them until a couple of months ago. But now, I’m not so sure. I am firmly convinced the game isn’t doing as great as it used to, but perhaps it isn’t doing as bad as we all thought.

I think so too. Problem with SWTOR is it doesn’t offer anything new and challenging to old players, so they shit on this game. I kinda understand them. I have been playing since RotHC and compared to Oricon or even SoR, SWTOR doesn’t have much to offer. I actually came back to this game but only to replay vanilla stories which are top tier.
I like this heraldry thing but they are giving it to us when game is not doing so well. I would say they should focus on something meaningful BUT 6.0 is coming so I will refrain myself from criticism and wait for new expac. Maybe it will be worth subbing because doing gf ops every day is boring to me and few progression guilds left in this game are not doing so well at this moment. I still hope for game’s comeback but let’s not get too excited.

Well they could always add a scriptable quest system for players to create their own dungeon “flashpoint” like adventures for other players to play them.

That would do for an infinite realm of new content with the only limit being our own imagination as players.
And it would keep everyone entertained while they release official new content.

We already got the stronghold system, this idea is already halfway in there.

The limit would be the options Bioware set up on such a system. Besides, a level designer is too much work for not enough rewards, I think. It’s not like decorating your strongholds is particularly popular.

The reward is that community will always have content you can play with. No more complaints you can only replay content while waiting for new official expansions. Guilds would love to use this to host events of all sort, content creators can always do an infinite of things with this system.
I dont care if we dont farm a single credit by doing this, the system itself would be rewarding.

And SH IS popular, even with non RP guilds and players.

Is there a price to changing a guilds heraldry? How many times can you change it? Once you commit it is it locked in for good?

It was 1 million credits (from the guild bank) to set one; probably the same cost to change/update it.

anyone happen to have a referral code?

Good, but what is this even good for? So I can now enjoy watching guilds with retarded names on the conquest board now with retarded emblem choices as well?

I would have prefered them to work on upgrading strongholds to allow us to script decorations and npcs so we could create our own RP quests or events on our homes or interactive Headquarters for our guilds. Thats something that we could actually play with.

So, when are we obtaining a Guild search tool or like, a public Guild directory? I’m so surprised that the only 2 ways to obtain information on a guild in this game are through shareable links or the inspection of a player that happens to be nearby!